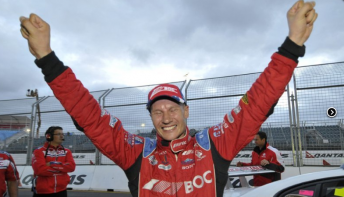 The induction of Jason Richards into the V8 Supercars Hall of Fame has immortalised the Kiwi driver among the legends of Australian tin top racing.

At the 2013 prize-giving ceremony in Sydney, the category touched the 500-strong audience when it announced Richards had become the latest to join an illustrious group.

The announcement, introduced by commentator Neil Crompton, was met with a standing ovation and many hundreds of watery eyes with Richards’ widow Charlotte making an acceptance speech.

Richards joins some of the very best of the sport in the Hall of Fame which was established in 1999 in what the sport calls a ‘grid of champions’.

Allan Moffat and Ian ‘Pete’ Geoghegan were the initial inductees with Richards becoming the 17th person to make the most honourable ‘grid’ in the sport.

V8 Supercars honoured Richards earlier this year with the introduction of the Jason Richards Trophy for the ITM 400 at  Pukekohe, which was fittingly won by the Kiwi’s former entry, now driven by Jason Bright.

See below for Jason Richards video