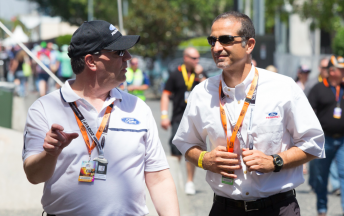 Graziano and Allison in Sydney

Ford’s global motorsport boss Jamie Allison says the local market will decide whether the blue oval reinvests in V8 Supercars after its factory support runs out at the end of next year.

Detroit-based Allison, who signs off all Ford Racing programs, was on a scouting mission at the Sydney 500, holding talks with Ford teams Ford Performance Racing and Dick Johnson Racing, as well as category management.

Spending the weekend with Ford Australia president and chief executive Bob Graziano, Allison remained neutral on what stance Ford would take with its future at the top level of Australian motorsport when pushed by Speedcafe.com

“V8s has got a great reputation and to come here and visit some of our teams who race Fords and I’m here to meet with the series (management) about some of the attributes that make for success between manufacturers and the series around relevancy and technology for the fans,” Allison told Speedcafe.com

“Everything (on Ford’s future commitment will come) in due time. Ultimately it will be a market decision. I’m really here to take in what I’ve always believed is an exciting form of racing and it has certainly lived up to it.

The question of what model Ford would homologate to race after the Falcon finishes production in 2016 remains unclear.

The Mustang, which will be sold in Australia from the end of 2015, is being touted as a possibility if V8 Supercars relax the rules which stipulate eligible cars must be four-door sedans.

“Those decisions ultimately come down to the market and obviously the series,” Allison said.

“We will be working with Bob and his team and looking at the various options that we could study a little bit more before we decide what we are going to do.

“Bob’s team is looking at the series and opportunities with the fans and looking at a place where we can tell our story and showcase our great products and tell people about the new Ford.”

Allison’s trip co-incided with a surprise visit by Penske Racing president Tim Cindric, who was gauging whether the powerful Charlotte-based racing enterprise will invest a stake in V8 Supercars through sponsorship or by buying out a team.

Cindric’s appearance followed two visits from Roger Penske to Australia in recent months, where he has mixed dealings for his recently acquired Western Star truck distributorship and meetings with V8 Supercars and its two Ford teams.

“Obviously Penske fields Fords (NASCAR) in North America so the fact that this is the last race of the year just makes an opportunity for Tim (Cindric) to visit,” Allison said, downplaying the connection between his and Cindric’s visits.

“If you are going to take in a great race like here in Sydney then that’s where we’d both end up. Sometimes these things happen with great coincidence.”

Although the possibility of Penske’s global resources being available to develop a Mustang V8 Supercar body and four-valve engine is a tantalising prospect, there are no guarantees that a Penske V8 Supercars effort would involve the manufacturer.

Penske has a variety of manufacturer links through his road car dealership empire in the United States, including the likes of BMW.