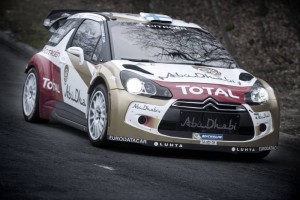 The French marque confirmed Northern Irishman Meeke and Ostberg, who moves from M-Sport along with Khalid Al Qassimi continuing to take part in a selection of events.

It brings to an end a two-year stint by Mikko Hirvonen who is expected to sign with the M-Sport squad with its boss Malcolm Wilson also keen for Robert Kubica to lead its charge next season.

“I’ve always been close to Citroen over the last few years. I’m really lucky to be able to work with a team that has so much experience and so many titles.”

“I have only competed in 10 World Championship rallies in a WRC.

Citroen boss Yves Matton said both Meeke and Ostberg are on the verge of becoming top class rally drivers.

The team will reveal its full rally program for 2014 along with its track racing program on December 16.

Citroen’s announcement comes ahead of Hyundai’s reveal of its entire WRC program which is expected to happen in Germany tonight local time.