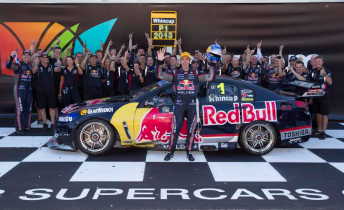 Jamie Whincup took out a record equalling fifth V8 Supercars Championship title after an aggressive drive to third in the final race of the season in Sydney.

Pole-sitter Shane van Gisbergen was the pace-setter from the outset and managed to win the race despite a mid-race Safety Car throwing a fuel strategy curve ball.

Despite needing just a 21st place finish even if his only rival Lowndes won, Whincup proved willing to swap paint with his rivals throughout the race.

The most intense moment occurred when Whincup attempted to follow Van Gisbergen through on Bright with just 10 laps to go.

The Red Bull and Team BOC Holdens made side-to-side contact at the final corner, but both survived without damage.

Van Gisbergen and Bright had run first and third in the opening stages, eventually completing long stints before taking the first of their two compulsory pitstops.

A Lap 33 Safety Car for James Moffat’s stranded Nissan then brought the majority of the field to pitlane for their second stops earlier than scheduled.

It soon became apparent upon the restart that all who used the Safety Car, expect Bright, would make a third stop for fuel.

Van Gisbergen meanwhile had elected against pitting under the yellow and blasted away at the restart before pitting for the final time with 22 laps to go.

He shook out of the cycle in fourth before using his fresher tyres to cut his way through Whincup, Reynolds and eventually Bright, who was low on fuel at the end but not forced to conserve.

Whincup was in the thick of the action throughout having earlier rubbed panels with Winterbottom on the back straight following a daring pass on the FPR Falcon in the second stint.

Winterbottom would eventually lose third in the standings to team-mate Will Davison after the latter overtook his brother Alex for seventh on the final lap.

Tim Slade rounded out his four-year stint with Erebus/SBR as the top Mercedes in 11th, while Todd Kelly led the Nissans home in a dismal 17th.

Michael Caruso had run inside the top 10 for the majority of the race before a trip down the Turn 11 escape road cost valuable positions.

Mechanical troubles took care of Moffat, Garth Tander and Scott Pye, while a brake failure for Tim Blanchard saw him drill the back of Fiore at Turn 1; causing the second Safety Car.

See below for full Race 36 results

See below for the championship standings