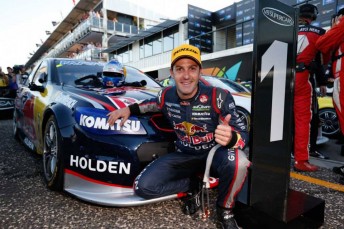 Jamie Whincup is promising to take a methodical approach to Sunday’s action at the Sydney 500 as he closes on a fifth V8 Supercars title.

The 30-year-old broke his Sydney Olympic Park hoodoo on Saturday by winning the penultimate race of the season.

Even if his only remaining title rival, Red Bull team-mate Craig Lowndes, wins the second 250km heat, Whincup will need to finish just 21st to take the title.

“It sounds easy, it may not be,” said Whincup of his Sunday task.

“I won’t be doing anything crazy. (Winning the final) race isn’t crazy important for me, it’s about winning the ultimate prize.

“It’s certainly not over. It’s not all done and dusted… I’ve still got to be on the ball to get the trophy.

“The best place to be is up the front to stay out of the carnage,” he added.

“We will certainly be trying to stay up the front as long as we possibly can. I certainly going to race. I’m not going to pull over and cruise around.

“Punters pay $100 to get in the gate they want to see something good.”

Whincup’s previous four titles have come in just five years; split only by his narrow defeat to then Dick Johnson Racing driver James Courtney in 2010.