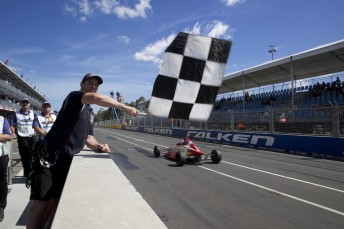 Jones was a shock winner of the third race at Sydney Olympic Park as long time leader Liam Sager hit the wall on the final lap.

The victory will go down in the history books as the last in current Championship guise.

Over the years the Championship has been a vital nursery in the careers of Australian Formula One drivers Mark Webber and Daniel Ricciardo as well as Indycar star Will Power.

As well, the majority of the V8 Supercar field have all spent time in the championship during their formative years.

The final race of the year was filled with drama as an unfortunate collision between teammates Simon Hodge and Luke Marquis, who were fighting over fourth, resulted in Hodge being elevated skywards in a spectacular incident.

Hodge walked away from the crash unhurt.

At the front, Sager seemed in control but a mistake on the final lap saw him touch the turn five wall. This gave Jones the lead which he duly converted into a race win.

Anton De Pasquale, who wrapped up the 2013 championship two weeks ago at Phillip Island, produced a champions drive to come from the back of the grid to finish second.

Sam Power rounded out the podium in third while Chelsea Angelo finished sixth to secure her best round result.

In the earlier race, Sager clinched the victory from Jones and Power.

De Pasquale suffered a rare retirement due to electrical issues.

Masini was one of ten drivers who were in with a shout of the title heading into this weekend’s season finale, which was decided in the final race.

The VIP Petfoods entry finished eighth and ninth in the two races which proved to be just enough to secure the championship.

However, Trent Young was the driver to beat as he won both the encounters on the Sydney streets, while Peter Carr was declared the round winner.