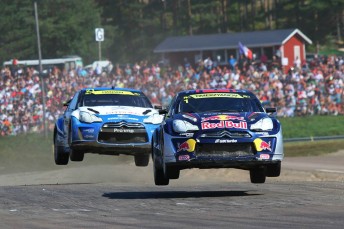 The FIA World Motor Sport Council confirmed that it will add a sixth world championship to its ranks in the form of the FIA World Rallycross Championship.

The newly formed championship will be made up of a 12 event calendar including events based in Argentina and Canada with the remaining 10 scattered throughout Europe.

“The launch of the new FIA World Rallycross Championship will allow this fantastic sport to grow and develop outside of its traditional base in Europe,” FIA President, Jean Todt told the championship’s official website.

“The exciting line up of races for 2014 will bring Rallycross to a new generation of fans around the world.”

What was an incredibly popular form of motorsport in the 70s and 80s has made somewhat of a comeback in recent years with the likes of Ken Block, Sebastien Loeb, Travis Pastrana and the Solberg brothers all competing in various championships throughout Europe and the US.

The strength of this comeback is also evident in the commercial arrangements for the 2014 FIA World Rallycross Championship with Monster Energy already signed as the series’ presenting sponsor.

What was formerly known as the European Rallycross Championship now steps up to the global stage – much to the delight of competitor and former WRC Champion Petter Solberg.

“Can’t wait to get this rollin’!” Solberg stated on his Facebook page.

“Here it is, the 2014 FIA World Rallycross Championship presented by Monster Energy calendar has been confirmed!”

The events outside Europe will be held at the Les Trois Riviere Grand Prix in Quebec, Canada, where the races will be part of a multi-street circuit motorsport event that attracts an attendance in excess of 130,000 people, as well as the F1 venue at Istanbul Park in Turkey.

The inaugural Australian Rallycross Championship was held at the Tailem Bend circuit on 24 June 1979 and was won by Larry Perkins, driving a 2.0-litre Volkswagen Beetle for Kruger Motors.