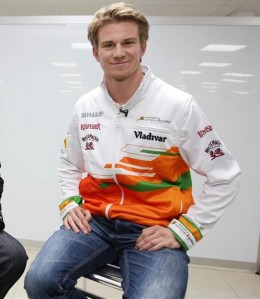 Nico Hulkenberg welcomed back to Force India for 2014

The F1 driver jigsaw puzzle is slowly falling into place with Nico Hulkenberg’s return to Force India confirmed in what is believed to be a minimum two-year deal.

Hulkenberg was widely expected to return to Force India after spending a single season this year at Sauber and missing out on a graduation to Lotus.

Force India’s 2013 drivers di Resta and Adrian Sutil are both on the move with Sutil the favourite to replace Hulkenberg at Sauber.

Force India says the identity of its second driver will be known soon, with many currently linking McLaren refugee Sergio Perez to the position.

Hulkenberg, meanwhile, is confident of running competitively next season.

“I am happy to come back to Force India,” he said.

“The team is aiming high for next year and I believe that the experience I have gained over the years will help us achieve those goals.

“I genuinely believe we can have a competitive package in 2014.

“I’ve heard a lot of positive things about the Mercedes engine as well, so I think there is a lot to be excited about for next year.

“I know this team and I can see their determination; it’s a great bunch of people and we all share the same hunger for success.”

Along with the remaining vacancy at the Silverstone-based squad, Sauber’s spearheads are yet to be announced as well as the vacant spot beside former Jules Bianchi at Marussia.

Confirmation of both 2014 Caterham drivers is yet to eventuate with the futures of Charles Pic and Giedo van der Garde unclear.