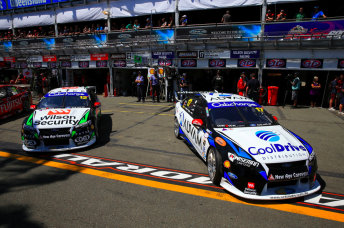 Dick Johnson says that his team is now back in control of its own destiny following the purchase of a second Racing Entitlements Contract.

The deal for long-time DJR investor Steve Brabeck to buy Paul Morris’ REC was revealed by Speedcafe.com on Tuesday and confirmed by the team this afternoon.

DJR found itself with just a single REC following its break-up with former co-owner Charlie Schwerkolt and has been operating a second car via Dean Fiore’s license this season.

Morris’ REC had been placed at Tekno for two seasons following the end of his own team.

A DJR statement announcing the deal credited Crimsafe managing director Brabeck as having “spearheaded” the purchase.

“From the end of the 2010 season I was aiming to regain control of our own destiny,” said Johnson.

“Steve and Ryan have been instrumental in the business going from strength to strength particularly this year and I am very grateful that Steve has been able to broker the deal with Paul Morris.

“This is another key step to delivering the success I know this team is capable of.”

“It is a great move for us,” added Brabeck.

“I have the absolute interests of DJR at heart and by focussing on this strategy, we really move into 2014 in a strong and viable manner.

“We are indeed very grateful to Paul who ensured that the transaction was smooth and met V8 Supercars criteria.”

DJR is yet to confirm drivers or a major sponsor for next season.

Current star Chaz Mostert will leave the team to replace Will Davison at Ford Performance Racing.

DJR’s technical partnership with the factory team will however continue, while its own operations are now being spearheaded by former FPR technical director Campbell Little.