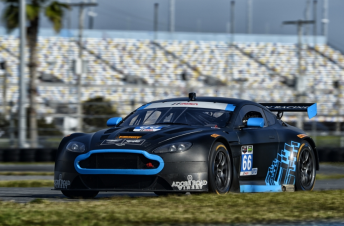 It will campaign two cars in the USC Championship, which combines the previous Grand Am and American Le Mans Series competitions.

The deal marks Davison’s first full-time drive in any category since finishing second in the 2009 Indy Lights Series.

“I am really pleased to be joining TRG Aston Martin Racing for the 2014 season,” Davison told Speedcafe.com.

“I’ve worked hard to earn an opportunity like this and fully intend to maximise it.

“The GT Daytona field will be competitive with up to 25 cars expected and drivers such as Jeroen Bleekemolen in the field.

“I’m excited for the challenge and can’t wait for it all to begin at the Daytona 24.”

Davison has spent almost a decade in the US, focussed primarily on carving a career in IndyCar.

The 27-year-old finally broke into the series with two starts for Dale Coyne this year, impressing on both occasions.

According to Davison, there remains a chance that he’ll make a one-off appearance in the open-wheel class’ biggest race next year.

“Negotiations are premature at this stage but the opportunity is certainly there.”

Davison was unable to find a drive in this year’s co-driver races, but is hopeful of making his V8 Supercar debut in 2014.

“Driving full time in endurance sportscar racing now and having proven myself in IndyCar, I feel my chances of a V8 enduro ride are better than before,” he said.

“The Bathurst 12 Hour with (cousin) Alex earlier this year really got me pumped to compete in the 1000.”

The USC season begins with its crown jewell event, the Rolex 24 at Daytona, on January 23-25.