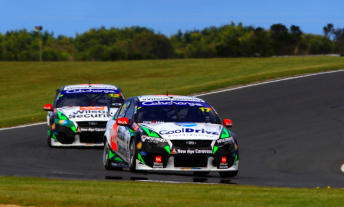 Dick Johnson Racing will remain a two-car team in 2014

Dick Johnson Racing is poised to confirm that it has solidified plans to remain a two-car team next season.

Speedcafe.com has learned that long-time investor in the legendary squad, Steve Brabeck, has purchased the Racing Entitlements Contract previously owned by Paul Morris.

Final paperwork for the V8 Supercars Board to approve the Crimsafe boss as the REC owner is expected to be completed this morning (Tuesday).

A DJR spokesman remained tight-lipped when approached by Speedcafe.com on Monday, but confirmed that an announcement about the team’s future is imminent.

The news will mark the first in a series of confirmations from the team, which is understood to be close to locking down a driver and major sponsor.

DJR’s 2014 structure had been in doubt for some time due to the impending end of the team’s two-year lease on Dean Fiore’s REC.

The Queensland based team was left with just one REC of its own following its split with former co-owner Charlie Schwerkolt.

A divorce agreement at the end of 2010 saw Schwerkolt awarded the #18 license, which remained at DJR for two years before moving to Ford Performance Racing.

DJR ran four cars in 2012 having also operated a then Paul Morris owned REC, which was subsequently sold to Lucas Dumbrell.

The license that Brabeck has purchased had been placed at Tekno Autosports by Morris for the last two seasons.

Tekno elected not to take up its purchase option last month and is expected to scale back to a single-car team.

Selling the license ensures that next year will mark the first since 1999 in which Morris does not have a stake in the V8 Supercars business.

The Queenslander drove in the championship for his own Paul Morris Motorsport outfit for nine seasons from the year 2000, adding a second car, initially under the Team Kiwi Racing banner, from 2005.

PMM continued as a two-car concern until the end of 2011, when the RECs splintered to DJR and Tekno.

The sale to DJR will end ongoing rumours that Morris had been plotting a revival of PMM concern from his still operational Norwell base.

Several question marks remain over the number of entries that will be seen next season, however, including the plans of Fiore, who could not be contacted by Speedcafe.com on Monday.