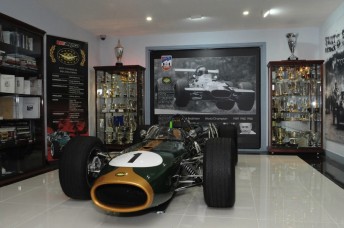 The famous BT19 in which Sir Jack Brabham won his third Formula 1 World Championship, along with key memorabilia from the legendary racer, has found a permanent home in Melbourne.

A special Annexe has been opened at the Victorian Historic Racing Register’s club rooms in Box Hill, Melbourne, to house the artefacts.

Brabham and five of his original Brabham Racing Organisation mechanics were on hand recently to officially open the display.

The Brabham BT19’s title winning season in 1966 remains the only time in history where a driver has won the F1 World Championship in a car bearing his own name.

VHRR member John Blanchard donated the area off the main clubrooms for the museum, while a team of members led by Bob Harborrow – who owns the original Maybach I racing car that Brabham competed against at the beginning of his racing career, worked to complete the facility and gather his trophy and memorabilia.

Some of the trophies include those from Brabham’s first Grand Prix victory at Monaco in 1959 and the trophy he received for winning the French Grand Prix at Reims.

Brabham won the 1959 and 1960 world titles driving Cooper machinery before starting his own Brabham Racing Organisation in 1962.