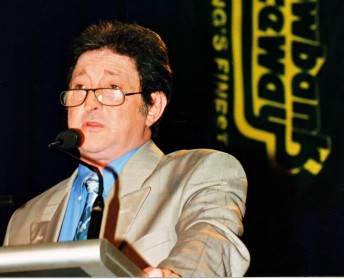 One of the pioneers of Queensland’s Willowbank Raceway drag racing track, Dennis Syrmis has lost his battle with illness.

The Queensland quarter mile stalwart had recently been inducted as one of the first five members of the Australian National Drag Racing Association’s Hall of Fame and was well respected for his contribution to the sport not only across Australia, but particularly in his home State of Queensland.

Dennis was the founding manager of Willowbank Raceway and sat as the National Director of ANDRA from 1974 to 1983. He stood down from his role as manager of the Raceway in 2002. His wife, Sue, continues to work in an administration role at the Ipswich track.

To honour Syrmis’ contribution to Willowbank during its 25 year celebrations – the last bastion of the traditional, old school quarter mile racetrack in Australia – the Board of the Club that runs the circuit named it the Dennis Syrmis Way.

Winterburn paid tribute to Syrmis’ contribution to the venue and to the sport.

“Dennis was not only a great administrator, but a very fierce and respected racer, with a knack of thinking and seeing forward to know what effect changes would have on our future,” said Winterburn.

“He will be sorely missed and fondly remembered, by all of us here at Willowbank Raceway, and the entire Australian drag racing family.”

Dennis was 71 years of age.