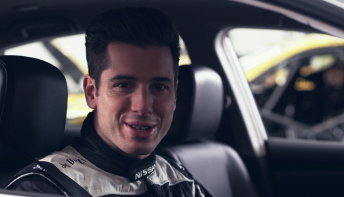 Nissan has today launched a series of television commercials featuring its V8 Supercars star Rick Kelly, coinciding with the arrival of its Altima model into Australian dealerships.

The 2006 V8 Supercars champion outlines the features of the mid-sized sedan in the five clips, which were shot inside Nissan Motorsport’s Braeside, Melbourne, workshop.

The L33 model Altima has been racing in the V8 Supercars Championship since the start of the season and is a new nameplate for the local market.

Its road car range consists of four and six cylinder variants, each fitted with the company’s new-generation Continuously Variable Transmission.

The appearance of V8 Supercar drivers in road car advertisements has been a relatively rare occurrence in recent years as Ford and Holden have reduced the emphasis on racing in their marketing.

New-for-2014 player Volvo has, however, been generically pushing its V8 Supercar program via television commercials since its launch.

See the five Nissan adverts below