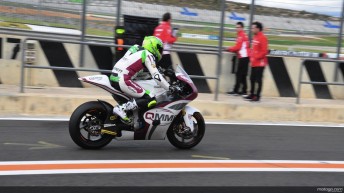 Australian rider Ant West has been stripped of his Moto2 results for the past 18 months following his positive drug test earlier this year at the French Grand Prix.

Initially West was handed a one-month ban for returning positive the stimulant, Methylhexanamine, by the FIM International Disciplinary Court (CDI).

The World Anti-Doping Agency (WADA) appealed the sentence on the basis it was too lenient, calling for a 24-month ban.

The appeal before the Court of Arbitration of Sport was partially upheld with the panel imposing an 18-month ban on West with the start of the penalty set retroactively at May 20, 2012.

“Subject to the lodging of any appeal by one of the parties within 30 days with the Swiss Federal Tribunal and as provided for in the CAS Award, all the sporting results obtained by Anthony West from 20 May 2012 up to the expiry of the period of ineligibility (i.e. 19 October 2013) will be invalidated,” the FIM said in a statement.

“The FIM will therefore modify the rankings of the 2012 and 2013 FIM Road Racing World Championships Grand Prix, Moto2 Class, accordingly.

“The FIM will also modify the rankings of the 2012 FIM Endurance Road Racing World Cup.”