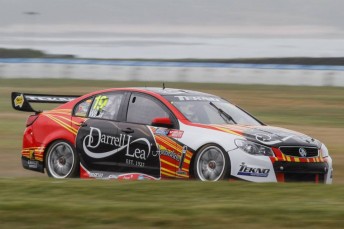 Jonathon Webb appears set to step down from full-time driving at the end of the season as his Tekno Autosports team contemplates scaling back to a single car.

The 29-year-old is currently in his fourth season in the class; the last three of which have been with his standalone Tekno outfit.

The squad expanded to two cars by leasing a Racing Entitlements Contract from Paul Morris at the start of last year, campaigning Michael Patrizi in the second car before signing Shane van Gisbergen for 2013.

Although Van Gisbergen and sponsor VIP Petfoods are both said to be locked in for the new season, Tekno recently decided against taking up its option to buy the Morris license at the end of its two-year lease.

While underlining that there are plenty of RECs still on the market, Webb admits that moving back to one car at the expense of his own driving career is a distinct possibility.

CLICK HERE for Tuesday’s story on the tumultuous REC market

Van Gisbergen ran at the front of the field last time out at Phillip Island, while Webb’s poor run of form continued. The #19 Holden has now finished just one of the last 15 races in the top 10.

Webb’s time away from the track is increasingly being taken up by his Tekno Performance road car business, which delivers after-market performance packages from the race team’s Yatala, Queensland, base.

It’s a side of the company that the 2009 V8 Supercars Development Series winner says could become his focus next year.

“There’s a lot of things up in the air and I’m not having a whole lot of fun doing what I’m doing at the moment,” Webb told Speedcafe.com when asked of his driving future at Phillip Island.

“It’s been a pretty tough year. We started off really strong but the results lately aren’t where I want them to be.

“We’ve got Shane’s car and Shane locked in, we’re really happy with that, but as far as where I go and what I do, we’ll see how it plays out in the next week or two.”

Despite struggling to attract commercial rate sponsorship since its inception, Tekno has spared few expenses on its equipment, running as a customer of class benchmark Triple Eight.

Tekno’s relationship with Triple Eight began through the championship winning team’s recently departed principal Adrian Burgess, who left his position as sporting director at Dick Johnson Racing at the same time that Webb moved his own entry away from DJR.

Although recent discussions to pair up with another REC holder are known to have stalled largely due to Tekno’s high-cost model, Webb says there is no intention to change tack.

“We’ve had a great relationship with Triple Eight and we intend to continue it,” he said, having already purchased two full cars and a spare chassis from the team this year.

“Obviously Adrian stepping away has changed the relationship a little bit, but Roland has been great and bent over backwards to help us the best he can since he took over the team principal role.”

Webb added that his squad is still on the lookout for a team principal of its own next season. The role has been filled by Jonathon’s father Steve since Bruce Jenkins’ sudden departure in October.

Steve Webb is expected to step away from involvement with the team next year, while soon-to-depart Walkinshaw Racing managing director Steve Hallam is known to be on Tekno’s radar.

Regardless of his own driving future, Jonathon Webb believes that Van Gisbergen can be a title contender next season with Tekno.

“I don’t think either way it (running one or two cars) is going to affect our performance and where we’re going,” he said.

“We’re pretty confident that we can get Shane into a position where he is a championship contender next year regardless.”