Kiwi out of S5000 due to travel restrictions > View

Vettel had 'no discussions' before Ferrari dumping > View 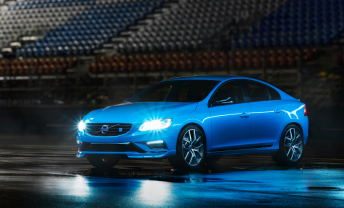 The team has elected to complete evaluation running before the Volvo V8 is ready in order to continue its aerodynamic and chassis development work.

The first test is expected to take place at an airfield in the week following the season-ending Sydney 500 on December 6-8.

The S60 bodywork and aero kit have been designed in Garry Rogers Motorsport’s Melbourne workshop with guidance from Swedish-based Polestar.

The first finished chassis is scheduled to have its bodywork completed this week. Like the Holden, Ford, Mercedes and 2014-spec Nissan, the Volvo V8 Supercar will run an end-plate mounted rear wing.

The Volvo B8444S-based V8 Supercars engine that the car will race is understood to have been tested for the first time on one of Polestar’s dynos last week.

It is not known exactly when the first unit will arrive in Australia, however, with no guarantees that it will be ready before the new year.

Although the two engines are said to be easily interchangeable within the control chassis, the team’s test plans with the Holden powerplant do not currently extend beyond straightline work.

The Volvo engine will need to be run for the official V8 Supercars homologation tests, where the car will be evaluated alongside a redesigned Nissan Altima and a benchmark car, most likely the category’s prototype VF Holden.

“You can do the basic aero testing with any engine in it,” he said.

“You can do the testing of the chassis and aero with any engine, and then when the engine is ready, off you go with the combined.

“For the basic loadings of the chassis you’ve got to get the aerodynamics right, so you’ve got to do that sooner rather than later.”

A mid-December maiden test for the Volvo would put its track debut between that seen for the new 2013 players Nissan (which tested for the first time on November 2, 2012) and Mercedes (which first tested on January 16, 2013).

Polestar’s managing director Christian Dahl stressed to Speedcafe.com on a recent visit to Australia that a late track debut for the engine wouldn’t  be a concern.

“Everyone looking from the outside is scared when they see the first round looming, but you do the hard work and it all comes together in the last weeks,” he said.

“It’s the same thing when we did the C30 (World Touring Car Championship car) from scratch, we didn’t have a component with a month to go, but then everything came together and we went racing.

“As long as you have control of your time schedules and supplies you will be fine.

“If you’re done developing a new package two months before the first race then you didn’t push hard enough to maximise everything you could.”

This week’s completion of the S60 V8 Supercar’s bodywork coincides with the global launch of the 2014 Volvo S60 road car facelift, which was unveiled by Polestar on Tuesday.

The new road car features minor revisions over the previous model, including the relocation of the fog lamps from the nose to the front bumper the most notable change.

While Australia was the only market to commit to the 2013 car, the new S60 Polestar and its wagon derivative, the V70, have been confirmed for Canada, the Netherlands, Japan, Sweden, Switzerland, United Kingdom and the USA.

In addition to working on its Volvos, GRM is this week rebuilding its #34 Holden after Alexandre Premat’s massive accident with James Courtney at the weekend’s Sargent Security Phillip Island 360.