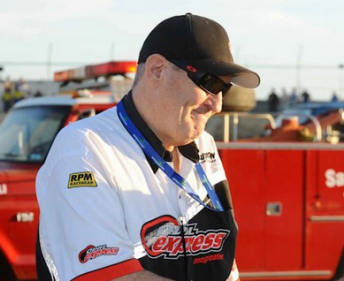 Jon Evans was one of the last of a breed of proper gentleman among the senior motor racing scribes.

In this era where geniality seems to be less conspicuous, Evans was a beacon for upholding decency, trust and one who always carried that good old fashioned trademark smile.

Gentleman Jon had turned 61 last month but sadly his life had been reduced to one of disappointment and pain as he fought ailing health, desperately in need of a liver transplant.

He died on Tuesday, putting an end to a four-year fight against a disease which cruelly intervened at a time when he had so much more to offer his profession and the broader network of friends and associates.

‘JE’ was a motor racing journo who had the ear of everyone from the floor sweeper, the wheel changer, the driver to the team head honcho.

It didn’t stop there. He would often be conversing with someone he didn’t know, engaging them in a vibrant chat where their knowledge of whatever the topic du jour, would be all the more richer when they turned on their heel and walked away.

As one of the elder statesman of the press corp, Jon was often the sounding board if something complicated or confusing needed explaining.

He was a kind soul who always greeted people with a warm, welcoming smile. That calming presence was a nice relief in an environment full of noise and fury.

As a colleague, one would always learn more about an issue or discover a decent angle you were otherwise unaware of from a casual chat with Jon.

All this while he was contentedly inhaling one of his beloved menthol-flavoured gaspers.

One of his many hallmarks were his race reports, which contained more detail than a schematic for a super-computer. They were the blueprint for any budding motor racing reporter to aspire to.

His lap-chart note-taking was meticulous, almost a forgotten art in the world of written motorsport journalism which was admired by those of younger years who knew the worth of such detail.

JE started at Auto Action in the 1980’s and his in-depth race reporting was one of his trademarks. He was also co-founder of the Speedway magazine, Oval Express.

In recent years Jon’s health was in decline. Just like many of the racers he wrote about, he never surrendered and fought to the bitter end.

He fiercely kept the details of his health battles to himself, not wanting to make a big deal of his situation, nor burden anyone with his problems.

These last couple of months Jon had been put on a waiting list for a liver transplant and despite looking down the barrel, he remained positive.

There remained a splash of humour against the gravity of his situation.

In June he posted on Facebook: “Surgeon’s prognosis? A two in three chance of surviving operation. Thanks for positivity!”

Last December he also wrote: “In my next life I’m coming back as a dentist – keep clients waiting, charge ridiculous prices and spend a max of 20 minutes with each one. Not to forget inflicting pain!”

JE was one of five inaugural inductees into the V8 Media Hall of Fame earlier this year, an acknowledgement roundly applauded but for which he remained extremely humble.

He was also made one of the honorary grand marshals for the 25th anniversary World Series Sprintcar Series last summer.

“To be even mentioned in the same category as V8 media heavyweights is truly an honour but to be one of the five inaugural inductees into the V8 Media Hall of Fame leaves me speechless,” Jon wrote on Facebook.

“Congrats to John Stoneham, Will Hagon, Ray Berghouse and Barry Oliver as all very deserving recipients. Huge thanks to peers who considered me to even be mentioned in same breath as them.”

Social media lit up with an outpouring of sentiments following news of Jon’s passing on Tuesday.

Below are some comments about the loss of a widely respected member of the Australian motor racing community.

V8 Supercars Australia
Jon was a remarkable journalist and a deeply humble, sincere man. As a family we are greatly saddened at the loss of one of the most revered, respected and admired members of the paddock. RIP Jon, V8 Supercars is much poorer for your loss.

Speedway Australia
JE is renowned across all motorsport categories in Australia and has been one of the world’s authorities on Sprintcar racing for more than three decades. Evans was also hugely acknowledged for his expertise in the United States where he was a regular visitor for Speedway and NASCAR events.

Paul Morris, V8 Supercar owner
I first met Jon when I raced Formula Fords in 1989. It took him 20 years to convince me that I should drive a Sprint Car. Jon was there at Avalon the first time I drove one and I am forever in debt to him. He was a great, no fuss, laid back cool guy and motosport, both dirt track and circuit, will miss him.

Jason Bright, V8 Supercar driver, via Twitter (@iJasonBright)
Very saddened to hear we have lost another great bloke from our paddock. Jon Evans you will be missed

Alex Davison, V8 Supercar driver, via Twitter (@alexdavison79)
Saddened to read about the passing of Jon Evans.1 of the nice guys in the paddock,always positive & good for a chat about anything racing.

Warren Luff, Carrera Cup driver, via Twitter (@WazzaLuff)
Very sad to hear of the passing of Jon Evans, a great man who did so much for our sport. Another great person taken from us too soon. RIP JE

Lee Holdsworth, V8 Supercar driver, via Twitter (@LeeHoldsworth)
Very sad to hear the news of Jon Evans passing. A great journalist and an even better guy, will surely be missed in the V8 paddock.

Tim Slade, V8 Supercar driver, via Twitter (@TimSlade47)
RIP Jon Evans. Definitely one of the good guys of our sport, no BS and a real racer. He will be missed

Nick Percat, V8 Supercar driver, via Twitter (@NickPercat)
RIP Jon Evans. Loved having a chat with you at the sprint cars. True champion of the sport.

Brooke Tatnell, Sprintcar champion, via Facebook
RIP Jon Evans. Loved having a chat with you at the sprint cars. True champion of the sport. Very sad news today with the passing of JE, he will surely be missed. He will be missed as a good guy and friend but the motorsport industry will be at a massive loss for what he has done especially his love for speedway and World Series.

Paul Marinelli, V8 Supercar driver manager, via Twitter (@marinelli_pm)
Sad day – one of the best people in our sport has left us. RIP Jon Evans, wonderful man, will never forget you

John Stoneham, V8 Media Hall of Fame inductee
Jonno was one of nature’s Gentlemen and we enjoyed many chats about origins from Speedway around the traps over many years…so now when I think of dirt tracks I will think of Jonno.

Chris Lambden, motorsport media identity, via Facebook
Spare a thought for one of the nicest, most uncomplicated guys in and around motorsport who lost his battle today. JE was the journalist and Speedway publisher that everyone trusted and respected, and he didn’t deserve the long fight he’s had to put up. It’s a sad day and we’ll miss him.

Brett Murray, motorsport media identity
Jon was a true professional and a man of high ethics and trust. Unfortunately we won’t have a chance to do that last trip to Knoxville together. I’m also grateful that Jon introduced me to the Dingus Lounge in Knoxville which is once of the world’s most iconic motor racing bars.

Phil Branagan, journalist, via Twitter (@philbranagan)
We’ve lost a fine writer who inspired many on and off the track to try harder and do better. Will miss Jon Evans terribly. God speed JE