Percat to replace Courtney for Sydney 500

Percat to replace Courtney for Sydney 500 James Courtney will miss the Sydney 500 due to injuries sustained in his horror crash at the weekend’s Phillip Island 360.

Courtney has been diagnosed with a fractured tibia and torn quad muscle following the accident, which saw Alex Premat’s Commodore slide into the driver’s door of the Holden Racing Team entry.

Having undergone an initial medical examination at the circuit, a MRI scan once back home on the Gold Coast revealed the extent of Courtney’s injuries.

“The scan showed a fracture to my tibia, and a tear in my quad muscle,” said Courtney, who is expected to remain on crutches for the next six weeks.

“It’s quite painful but I’m doing alright and it’s good to know what the damage is.

“Unfortunately I won’t be racing at the Sydney 500, it’s my hometown race and always exciting.

“Being a racer I would be out there right now if I could but it’s better to get the recovery process started so I come back firing on all eight cylinders next season.”

Courtney spent time with his team and selected media in the HRT garage following the accident on Saturday evening, where he stated that he would return to action the following day had the car been fixable. 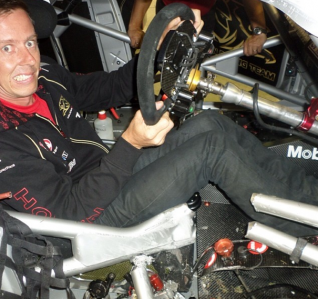 Courtney will be replaced for Sydney by 25-year-old South Australian Nick Percat for the event.

Percat spent this year in the Carrera Cup after three seasons with Walkinshaw support in the Dunlop Series.

Percat is testing the team’s Supercheap Auto Holden today at Winton in place of Russell Ingall and will campaign a new chassis, WR 020, at the December event.

Percat has competed in eight V8 Supercars Championship endurance events for the Holden factory team, winning the 2011 Bathurst 1000 alongside Tander.

Making his first solo start in the main series at Sydney Olympic Park could prove the perfect preparation for a graduation to the championship in a fourth Walkinshaw entry next season.