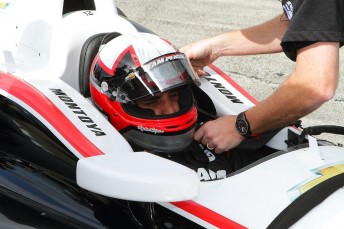 Juan Montoya has turned his initial laps in an IndyCar for the first time in seven years ahead of his return to the series with the powerful Penske operation in 2014.

It was announced in September that Montoya will handle the #2 car for Penske alongside incumbents Will Power and Helio Castroneves next season.

Montoya, 38, turned around 20 laps at the Sebring circuit after the car was shaken down initially by Power with Castroneves and the legendary former Penske champion Rick Mears, a four-times Indy 500 champion, also in attendance at the one-car test.

He was reported to be within a few tenths of Power’s time.

Power said: “I actually expected to learn from him. He’s already brought some good ideas to the team even before he got in the car,” Power told IndyCar.com

“Just from what I see from the data he has a very similar style to me. They way he brakes and everything. That should be good as far as our set-ups (go).”

The Colombian won the 1999 CART series when he was with the Ganassi stable and the following year he snared the Indy 500 with the same team before venturing into F1.

Montoya has returned to open-wheel after an eight-year stint in NASCAR where he has driven the #42 for the Earnhardt Ganassi operation.

The winner of seven F1 races including the Australian and Italian GPs is determined to return as a winner in his second coming as an Indy driver.

“I ran against him (Helio) when I won the Championship (1999) and he’s still doing it,” Montoya told IndyCar.com

“For them to get in the car every day its no big deal. This is their home, and I need to make this my home.”

Penske racing president Tim Cindric, who was at Penske’s squad when Montoya raced with Ganassi’s open wheel team 14 years ago tweeted: “Easiest way to explain my thoughts on our first day with @jpmontoya: It will be much better racing with him than against him.”