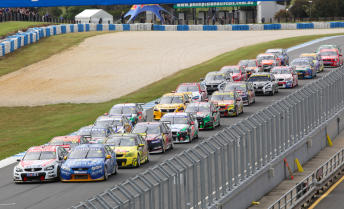 The V8 Supercars grid is in danger of dipping below 28 cars next season as Racing Entitlement Contract owners struggle to lock in commercial deals ahead of the December 1 entry deadline.

A combination of the current lack of dividend payments from V8 Supercars following a poor television deal and a difficult sponsorship market has put the squeeze on those trying to stay afloat.

Although the deadline only requires a commitment to the new season and not the nomination of a team or driver with which the REC will run, entering without solid plans poses a major financial risk.

Handing a REC back to V8 Supercars before the date would result in the category’s management attempting to sell the license; giving the proceeds to the former owner if and when a transaction takes place.

If a REC is handed in after the cut-off and is not able to be on-sold by V8 Supercars prior to the start of the season, a $150,000 fine per event missed would be deducted from any eventual sale revenue.

V8 Supercars previously ‘absorbed’ an unwanted Walkinshaw Racing license by itself paying an indexed price for it at the end of 2010, but whether such a move would be repeated, and what price would be offered, remains to be seen.

Dean Fiore and Lucas Dumbrell both confirmed to Speedcafe.com at the weekend that they could hand their RECs in this week if they are unable to lock down deals. 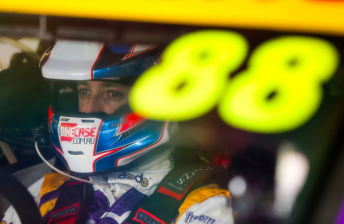 Fiore owns the #12 license currently at Dick Johnson Racing and in turn drives for Dumbrell, who owns the #80 and #88 RECs.

“There’s still a lot to play out yet so this week is going to be pretty interesting,” Fiore told Speedcafe.com.

Fiore says that it is unlikely he will drive elsewhere next year if he can not put together a deal to keep his own license in the championship.

Complicating the matter is the fact that Fiore’s current backers own the Triple Eight-built Holden that the West Australian has campaigned at LDM.

While there is an agreement in place for LDM to continue to use the vehicle regardless of Fiore’s future, there is no guarantee it will be required.

“We 100 percent need to know before the deadline where we’re at in terms of funding,” Dumbrell told Speedcafe.com of December 1, which coincidentally doubles as both Dumbrell and Fiore’s birthdays.

“Ideally we’ll run two cars as we are but it all comes back to funding. It’s the same for everyone. If you haven’t got sponsors you can’t commit to going racing.

“We’ll put everything on the whiteboard this week, look at where it all sits and what the shortfall is.

“We’re working hard to try and lock in some sponsors but it’s very difficult out there at the moment.”

Although the Fiore and Dumbrell licenses are the only ones that appear in danger of being lost, several others remain without confirmed homes.

Those include the Paul Morris-owned REC currently run by Tekno Autosports. Morris has been informed by Tekno that it has elected not to take up its option to buy the license, leaving the former driver likely to restart a single-car Paul Morris Motorsports effort from his own Norwell base.

Entering an in-house customer alliance with Tekno, which appears destined to end up running just its own REC for Shane van Gisbergen, also looms as a possibility.

Other RECs without confirmed futures but certain to stay in the championship are James Rosenberg’s #47 and the Brad Jones/Jason Bright co-owned #21.

Rosenberg’s license is tipped to be heading to Walkinshaw Racing, where it would be used to run a fourth car for the Holden team’s long-time project Nick Percat.

Such a move would leave the #47 REC’s existing team, Erebus Motorsport, poised to field just two Mercedes entries in 2014 for Lee Holdsworth and new signing Will Davison.

The future of the #21 license will be impacted heavily by its current key backers Wilson Security and Paynter Dixon, which are understood to be still assessing their options for driver David Wall.

A switch to Dick Johnson Racing, which has too enjoyed Wilson Security backing this year, is known to be among the possibilities for the former Australian GT Champion.

Single-car Walkinshaw customer Tony D’Alberto Racing has committed to the new season but is still searching for major backing, while Ford Performance Racing customer Charlie Schwerkolt has a sponsor but remains very much in the driver market.

The ongoing battle for the smaller teams to lock in their plans follows a silly season defined by Tim Slade’s switch from Erebus to Walkinshaw Racing, Will Davison’s move from Ford Performance Racing to Erebus and James Courtney’s decision to remain at the Holden Racing Team.

The most high-profile change for next season will meanwhile be Garry Rogers Motorsport’s transition into Volvo Polestar Racing, for which a team-mate to Scott McLaughlin is yet to be confirmed.