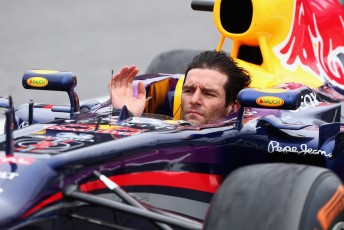 Red Bull team principal Christian Horner said Mark Webber has signed off on his grand prix career while on top of his game.

Speaking after Webber claimed his 42nd F1 podium after a career spanning 12 years, Horner was prompted to half-jokingly question the timing of the Australian’s retirement.

Milling around before the podium presentation, Horner was overheard asking Webber: “Are you sure you want to retire?

“Your move on Lewis (Hamilton) around the outside into turn 5 was massively impressive,” Horner continued after Vettel and Webber finished 1-2 at the season-ending Brazilian GP.

Horner later explained that while it had been an unbelievable year for the team, it was ‘also great for him (Webber) to go while he is still at the top of his game’.

Webber had finished 10.4s behind Sebastian Vettel but that gap had been reduced to a little over 5s at one point, after a mix-up with the German’s tyres during an unscheduled pit stop.

Horner said the reason behind the late stop for Vettel was to offset rivals gaining a ‘free stop’ under a safety car.

“It was a massively late call for Sebastian – the boys were already expecting Mark for a scheduled stop – and that created a bit of confusion to get the right tyres on the right car,” Horner explained to F1.com

“And with the margin that we had we didn’t give anything away.”

Horner acknowledged that the seven years Webber has been employed at Red Bull had been an incredible journey.

“I had tried to sign him a few years earlier than that to drive for the team that I had in Formula 3000 – so his pace has never been in doubt.

“He has played such a big part in us winning four constructors’ championships.

“It’s just been unlucky for him that his teammate is called Sebastian Vettel.

“But the way he has now signed off on his career is remarkable as you see so many sportsmen going out with a bit of a whimper – he is still at the top of his game.”