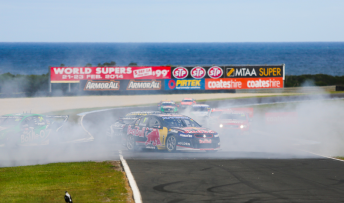 Jamie Whincup will head into next month’s V8 Supercars title decider with a 20 point lead over Craig Lowndes after taking victory in Race 34 at Phillip Island.

Just as Lowndes had done in the afternoon’s earlier heat, Whincup set up his win with unbeatable early pace.

The Red Bull Holden moved from fifth on the grid to the lead in the space of just two laps, scything by Fabian Coulthard, Jason Bright, Mark Winterbottom and Lowndes in quick succession.

Lowndes struggled for rear grip in the early stages, dropping to third behind Winterbottom on Lap 3.

The order remained stagnant until the flag, despite two Safety Car interventions for mid-race incidents.

The first came after Lee Holdsworth’s Mercedes stopped at Lukey Heights with its left-front wheel missing.

The errant wheel shot over the fence and spectators before bouncing clear of harm’s way.

The restart lap provided yet more action, with a tag from David Reynolds spinning Chaz Mostert at the Turn 4 hairpin. Russell Ingall was also caught up in the melee.

Bright and Coulthard were best-of-the-rest behind the title contenders at the flag, while Will Davison, James Moffat, Rick Kelly, Alex Davison and Shane van Gisbergen completed the top 10.

Whincup’s win stretches his lead from six points to 20 over Lowndes, while Winterbottom is 105 points further adrift in third.

Will Davison is also in mathematical title contention sitting 223 points down with 300 available in Sydney.

See below for the full Race 34 result

See below for the updated points standings (Top 28)