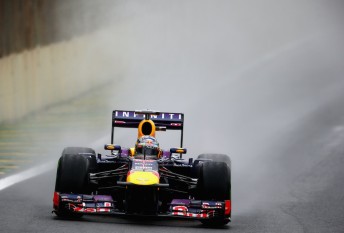 German driver Sebastian Vettel has put in a stunning performance to crack pole position for the season-ending Brazilian Grand Prix.

Vettel remains on-track for a record-equalling ninth consecutive grand prix victory after seizing the prime spot by a decisive margin in a crippling display of superiority.

The third and final part of qualifying was delayed by 45 minutes as rain lashed the Interlagos circuit, becoming worse towards the end of the 15-minute Q2.

Mercedes driver Nico Rosberg was the best-of-the-rest but still fell .63s short of Vettel’s mark while a resurgent Fernando Alonso gave Ferrari hope for a decent finish to 2013 and will start from third.

Australia’s retiring Mark Weber could not sustain his brilliant qualifying run in recent races and will start from fourth, almost 1.1s in arrears of Vettel’s paralysing lap.

Lewis Hamilton was fifth ahead of Romain Grosjean who had earlier held the top spot as Lotus were the first to bang a set of intermediates on his machine.

Grosjean’s team-mate Heikki Kovalainen was bumped from Q3, by the smallest of margins by Nico Hulkenberg as conditions in Q2 worsened.

Aussie Daniel Ricciardo led both Toro Rosso entries into the top 10 and will start from seventh ahead of Jean-Eric Vergne with Felipe Massa ninth and Hulkenberg 10th.

Earlier Sergio Perez, in his final qualifying session for McLaren, crashed however he will start from 14th, one stop ahead of team-mate Jenson Button as the Woking team complete a season to forget.