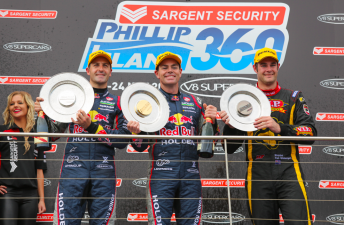 Craig Lowndes drove from eighth on the grid to beat team-mate Jamie Whincup to victory in Race 33 at Phillip Island.

The result moves Lowndes to within six points of Whincup in the championship standings with just three races remaining.

Whincup had led by six seconds at the halfway mark, but lost his advantage when Michael Caruso’s Nissan expired, triggering a Safety Car.

Lowndes had superior speed upon the restart, taking the lead with an inside move into the Turn 4 hairpin just a lap after the green flags flew.

The veteran had earlier moved from eighth to third at the first corner, which had seen pole-sitter Coulthard, Mark Winterbottom, Whincup, Chaz Mostert and Shane van Gisbergen all involved in a squeze at the front.

Whincup escaped with the lead from Mostert, who was then involved in a second lap scuffle with Lowndes that saw Van Gisbergen through to second and Lowndes back to fifth.

The Red Bull driver took just 10 laps to methodically move his way by Coulthard, Mostert and Van Gisbergen, with the last of the three moves occurring moments prior to the full-course yellow.

Van Gisbergen held off Mostert to the flag despite struggling for late speed, while Coulthard, Alex Davison, Winterbottom, Will Davison, David Reynolds and Garth Tander completed the top 10.

Winterbottom had fared worst from the tight first corner; bumped back to seventh and unable to recover.

His Ford Performance Racing team-mate Will Davison moved in the opposite direction, picking his way from 13th on the grid to eighth.

See below for the Race 33 result