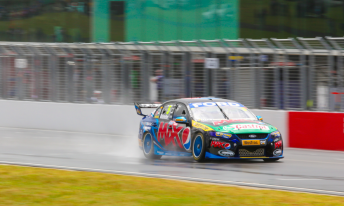 Mark Winterbottom will start Race 32 of the V8 Supercars Championship from pole position after coming out on top in a thrilling qualifying session at Phillip Island.

The Ford Performance Racing driver sat just 27th when the chequered flag fell before vaulting to the top with a 1:30.61s effort on his final lap.

The time is the fastest ever for a V8 Supercar around Phillip Island, securing Winterbottom a 28th career pole.

Winterbottom’s title rivals Craig Lowndes, Jamie Whincup and Will Davison were also outside the top 20 with just 30 seconds on the clock.

Lowndes managed to jump temporarily to the top before ending up second, while Whincup and Davison could manage just 13th and 10th respectively.

The session started in sunny but wet conditions. Grooved rubber was required until the halfway mark; at which point Van Gisbergen was fastest.

Several endured incidents during the final 10 minutes of slick tyre running. Fabian Coulthard and Jamie Whincup both speared off in separate incidents at Turn 2, but crucially managed to rejoin without causing a red flag.

James Moffat also found himself recovering from the Turn 2 grass after a wild moment at Turn 1. The Norton Nissan driver ended the 20 minutes a frustrated 27th.