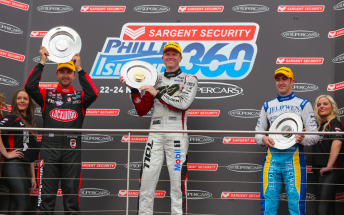 Garth Tander cruised to victory at the end of a drama filled final running of the 60/60 Super Sprint race format at Phillip Island.

Tander took the lead of the race when Craig Lowndes and Mark Winterbottom clashed on the final corner of the first segment.

The two title contenders made side-to-side contact as Winterbottom dived to the inside; dropping the Ford driver to fourth and the Holden to 15th.

Tander and Alex Davison were left to share the front-row for the restart, with the Holden Racing Team Commodore eventually taking a comfortable three second win.

Davison bravely held off Fabian Coulthard for 12 of the second 14 laps before being relegated to his eventual finishing position of third.

Jamie Whincup moved through from 13th on the grid to finish as the best of the title contenders in fourth having overtaken Winterbottom on the final lap.

A dramatic accident occurred towards the end of the first 14 laps, where the Holdens of James Courtney and Alexandre Premat made heavy side-on-contact.

Premat, who later blamed a tyre problem, ran wide through Turn 3 before sliding back on at high-speed while Courtney was negotiating the hairpin.

Both drivers walked away from their heavily damaged cars, albeit with a limp in the case of Courtney, whose car suffered extensive intrusion bar damage on the driver’s side.

The results see Whincup return to the points lead ahead of team-mate Jamie Whincup, with Winterbottom remaining third.

It was a tough afternoon for the fourth championship contender Will Davison, who was turned around after squeezing Van Gisbergen at the penultimate corner during the first segment.

Spinning to the back of the field, the FPR Falcon driver eventually recovered to finish 17th.

Others in the wars included James Moffat, David Reynolds, Jason Bright, Jonathon Webb and Tim Slade; all of whom suffered a variety of tyre problems.

See below for the full Race 32 result

See below for the updated points standings (Top 28 only)