Briatore could see that Red Bull was assembling the necessary technical pieces to become a force in F1.

The key was when Red Bull managed to poach Adrian Newey, one of the best designers in grand prix history, from McLaren in 2006. The start of 2007 would see Newey’s first Red Bull, the RB3, debut.

Webber had come into the team as the new stable-mate to veteran David Coulthard, who had Christian Klien.

The tall Aussie had no reason to doubt Briatore’s managerial decision even if he cost Webber a place in the championship-winning Renault squad in the previous two seasons. Webber was happy to return to Milton Keynes as many of the troops were retained from the Jaguar days.

Importantly Red Bull was staffed by a completely new regime at the top and the Newey hiring had generated plenty of hope for future success.

The team had a solitary podium in its first two years of operation (Coulthard’s third at Monaco in 2006) and the timing of Webber’s arrival had been seen as perfect for a team that was on the way up.

Red Bull did not progress initially as its development indicated however with the RB3 having a difficult time. 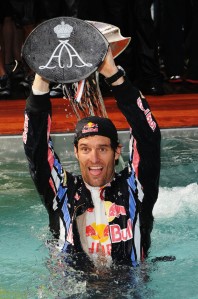 Webber lobbed onto his first podium at the European GP in third place, the only highlight for him and the team.

The Aussie finished 12th in the standings, two places behind Coulthard.

The 2008 season started dismally for Webber when he retired from the Australian GP however he then strung together five consecutive top 10 finishes, ending the year 11th with 21 points.

He comprehensively out-performed and out-scored Coulthard.

For 2009, Red Bull were beaming with the performances of the RB5 in pre-season testing. Webber would be joined by Sebastian Vettel, who graduated from Red Bull’s feeder squad, Toro Rosso.

The controversial crash with Vettel in Turkey in 2010

Vettel would lead the team to its first victory at the third race of the season in Shanghai with Webber claiming second place.

The young German won the British GP and to that point Webber had scored four podium finishes yet that elusive maiden F1 victory seemed a lot more than just a finger tip away.

Following Silverstone the series moved to the Nurburgring where at Webber’s 130th F1 start he claimed victory despite a poor start from pole position.

That victory remains one of Webber’s career highlights because he had fierce competition from Rubens Barrichello and copped a penalty in the process.

It was one of those performances where if anyone doubted why Webber calls his Twitter handle ‘Aussie Grit’ they need simply to find a replay of the race. 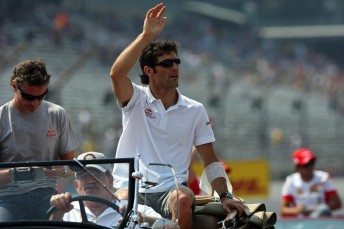 “Nurburgring ’09 was a big moment – a huge relief but also good because of the way I won,” Webber was quoted in Racer magazine.

Webber would go on to score his second victory at Interlagos later in the year while Vettel would score another couple of wins.

Red Bull had arrived as a championship contender and Webber had a formidable team-mate in Vettel, who had finished second in the standings, two places higher than Webber.

Amid a season of tremendous movement and changes Vettel and Webber were on the cusp of achieving greatness.

It was a monumental dogfight where Webber went into the fourth last race of the year in Japan holding a 14-point lead.

Vettel had a cracking tail-end of the season and managed to overhaul Webber, winning the championship after scoring five wins to Webber’s four in 2010.

Webber’s accident at the Korean GP was the telling blow.

It was the season where the championship had been Webber’s for the taking, however the driver who was still waiting to win his first title since leaving go-karts all those years ago came away empty handed after seeing the greatest prize in world motor racing slip from his grasp.

Vettel annihilated the field in 2011, successfully defending his title with 11 wins while Webber’s solitary win came at the end of the year at Interlagos.

In 2012 Webber managed to nab wins at Silverstone and Monaco, winning both for the second time in his career, however Vettel took his third title narrowly from Ferrari’s Fernando Alonso with Webber finishing sixth.

Speculation had mounted early in 2013 that Webber had formed an association with Porsche and that his F1 career was coming to an end.

Indeed confirmation came in late June that Webber had signed with Porsche to lead the company back into its return to the outright LMP1 class for Le Mans and the World Endurance Championship from 2014.

The 2013 season sadly will be remembered for not only Webber’s last but for the ‘Multi 21’ fiasco at the Malaysian GP.

Webber had turned down his engine late in the race and appeared to have victory in his keeping however Vettel defied team orders to maintain station before passing the Australian in an act tantamount to betrayal of the worst of kind.

Vettel had proceeded to launch another staggering run of performances through 2013, netting 11 wins leading up to the final round in Brazil this weekend.

The relentless German had sealed the title at the Indian GP while had half a dozen podiums but that elusive 10th F1 win had deserted him.

One of the highlights of the year for Webber was his ripping lap to claim pole at the Abu Dhabi grand prix.

It was a demonstration of how Webber has been one of the most brilliant high-speed corner drivers in grand prix racing, distinctly different than Vettel.

Ever the diplomat, Webber leaves F1 with dignity after a strong career that didn’t quite crack the top rung of the ladder.