The appointment follows an early contract release from Ford Performance Racing, for which the Gold Coast-based Little had worked since 2010.

Little had been splitting his time between the two teams since August, working selected days at DJR’s factory in between race meetings, where he continued to engineer Alex Davison’s #18 FPR Falcon.

Little’s full-time signing is a significant boost for DJR as its continues to work on its 2014 package, which is currently without a second confirmed Race Entitlements Contract.

Despite losing Chaz Mostert to the factory squad, DJR’s technical relationship with FPR will continue.

“It’s great to be working with DJR on a full-time basis ahead of 2014,” Little told Speedcafe.com.

“I’ve been charged with recruiting engineers and mechanics to bolster the team after a difficult period for them.

“It’s a big challenge and there’s plenty of work to do, but I’m really looking forward to it.” 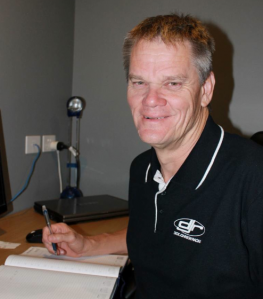 “Having Campbell in our workshop and pits for the last two rounds ahead of next year is just what we need,” said Johnson.

“He is a top bloke with a wealth of knowledge in V8 Supercars and I have always admired his ‘no nonsense’ approach.

“The effect this will have on our relationship with FPR will only be positive and it shows once again that we are well and truly on the way back.”

DJR began its technical relationship with FPR at the begining of the current season after the privateer outfit’s latest financial crisis saw it on the brink of shutting its doors.

The two teams are the only ones running Fords in the championship following the transformation of Stone Brothers Racing into Erebus Motorsport for 2013.

FPR team principal Tim Edwards added that he was pleased that Little’s move will bolster Ford’s overall performance in the class.

“Campbell’s appointment at DJR is the ideal way for both teams to work even closer and get a head start on ensuring all Fords on the 2014 V8 Supercars grid are as competitive as possible,” he said.

“He knows the inner workings of our engineering group and the resources we have at our disposal, which will help DJR be as competitive as possible.”

The V8 Supercars will undertake three practice sessions at Phillip Island today ahead of the weekend’s racing.