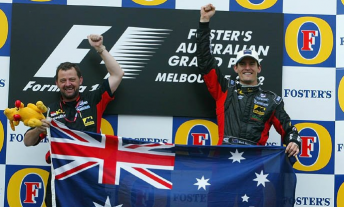 Mark Webber’s magic moment alongside Minardi owner Paul Stoddart after finishing fifth at his F1 debut in 2002. After the podium ceremony was completed, race officials invited the pair up for a special celebration

The door into grand prix racing was finally opened for Mark Webber after his manager Flavio Briatore helped furnish a deal to be placed at Minardi.

The Minardi team had scratched around in F1 since 1985. In 2001, with the team close to the brink of collapse, Paul Stoddart, an expat Aussie who made a fortune in the aviation charter business out of the companies main base at Bournemouth in England, bought into the team.

He fused it with his F3000 team and in an Aussie fairytale, the Melbourne Grand Prix in March, 2002, would see Stoddart give Webber his first GP start.

The twice testing F1 machinery Webber was starry eyed at the sheer brute power of the grand prix cars compared to what he had been used to but also remarked how cool it was to share the track with the likes of Michael Schumacher. 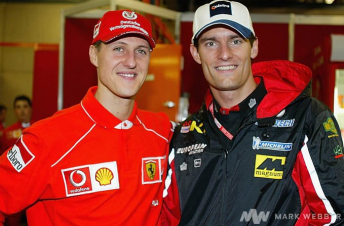 “At first you do a bit of a double-take because you are sharing the track with Schumacher who had been an idol and now I’ve got my chance,” Webber commented at the time.

“It was one thing to test an F1 car but to actually now be confirmed for some races is pretty surreal after so much time trying.”

In Melbourne Webber would lift, largely through attrition, the under-funded and under-performing Minardi to a memorable fifth place, the team’s best finish since 1994 when Pierluigi Martini recorded the same placing twice.

Eight cars were taken out in a first-corner crash,  however Webber drove to instructions to guide the car to the finish and after starting from 18th.

The effort was celebrated like a victory with Webber and Stoddart invited up to the podium in an unprecedented move that would otherwise have breached the rules. That was the start of what was to be a three-race contract however Stoddart managed to sew a deal together to keep Webber going for the remainder of the year.

Plans beyond that were unclear although Webber tested for the new Jaguar team mid-year and the team’s principal at the time, Niki Lauda, announced Webber and Williams test driver Antonio Pizzonia for 2003.

After purchasing Stewart Grand Prix at the end of 1999, Jaguar was now in its fourth season. Its latest contender, the R4, was powered by an all-new Cosworth CR5 V10 with a 90-degree vee angle.

Following difficult early years, a key Jaguar insider, who had been heavily involved in the successful companies Le Mans program in the 1980’s confirmed the Midlands marque would commit to F1 until they had won.

It was comforting for Webber although the performance of the car did not live up to expectations through 2003 with the chassis having a distinct liking to tearing up rear tyres.

Webber meanwhile was having a similar effect on team-mates. Having seen off Alex Yoong and Ant Davidson at Minardi, Pizzonia was sacked after 11 races and replaced for the remainder of the season by Justin Wilson. 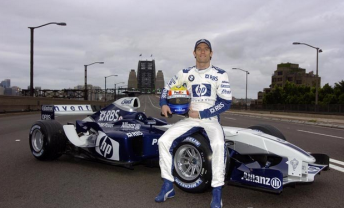 The Milton Keynes squad re-signed Webber for 2004, when he was to be joined by Austrian Christian Klien, who had considerable backing from Red Bull.

Webber went on to endure a difficult year, frustrated with eight retirements from 18 races. It was to be Jaguar’s swansong with the British marque selling out to Red Bull.

That left Webber at yet another intersection in his career and with the benefit of hindsight, signing with Williams for 2005 and 2006 was to be a decision the driver, aptly named Aussie Grit, would rue.

On Webber’s move to the time-honoured Grove squad, for which compatriot Alan Jones had won them their first championship in 1980, the now established grand prix driver vowed to remain grounded.

He fastidiously made a point of shunning the glamour playboy lifestyle of an F1 driver, electing to fly with the no frills Easy Jet airline anywhere he could. He vowed to maintain that degree of normality as a Williams driver.

He had turned down an offer from Renault which proceeded to win the title with Fernando Alonso claiming the first of back-to-back Championships.

Williams had a terrible year with the eponymous team owner Frank Williams and BMW falling out during 2005.

It left the team to use Cosworth powerplants in 2006 with Webber suffering a diabolical season that included 11 retirements.