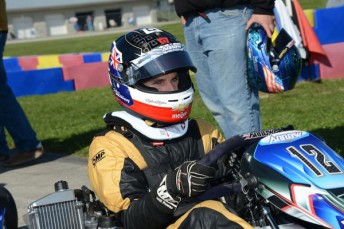 The 17th Annual SKUSA SuperNationals in Las Vegas has not only attracted many of the world’s best kart racers but also some of the top motorsport names from around the globe.

The event, held on a temporary circuit adjacent to the Rio All-Suites Hotel & Casino, kicked off on Wednesday with practice ahead of Friday’s qualifying session and racing across the weekend.

Leading the charge for the Australian karting contingent will be 2012 CIK Stars of Karting Champions Adam Hughes and Cameron Hill who both will make their international KZ2 debut this weekend.

Hughes and Hill will line up against the world’s elite drivers in the CIK-specification KZ2 category courtesy of the $10,000 scholarship provided to them for winning the Pro Light (KF) and Pro Junior (KFJ) categories respectively last year.

For Hughes it is his second time competing overseas, while Hill has never competed outside of his home country. They will be lining up against some of the world’s best drivers, including KZ World Cup Champions Jonathon Thonon and Bas Lammers. In addition with Hughes and Hill, there are also another four Aussies in the 37-driver KZ2 field with Jason Faint, Kel Treseder, Kyle Ensbey and Ricky Capo on the high-quality entry list.

“The scale of this event is just incredible, the back drop is crazy, very unique, and all of it is just super exciting,” said Hughes.“This event has been months in the planning for me and there have been a lot of people who have helped me get here. Along with the scholarship for winning the CIK Stars of Karting title it’s great to have the backing of CoreIT, Coates Hire, Inline Engineering services, FreeM, Morris Finance, FanFuel and Autologic BMW specialists for my campaign.

“It would be amazing to finish inside the top ten in such a high quality field but my number one aim is to be the first Australian across the line in the final.” Like Hughes, Hill has been amazed at the scale of this week’s event.

“I’ve just been amazed by the size of the place, but I guess it just lives up to the ‘everything’s bigger in Vegas’ motto,” said Hill.

“The facilities are very professional and clean cut. It’s already a very exciting atmosphere and I’m really looking forward to hitting the track. It’s practically a street circuit, very fast and no room for error.”

“It’s exciting to be up against the world’s best and my aim is to give it all I have and put in a solid performance.”

Of the 36-strong contingent of Australian drivers competing at the event, David Sera and Kip Foster are two of the most experience having both competed in Las Vegas on four occasions.

Sera’s drive from 29th to second, missing the win by 0.001 seconds, in 2010 was one of the best of all-time in the event’s 17-year history while Foster has been unlucky having crossed the line first on two occasions, only to have the win taken away from him by a technicality.

They will both line up in the TaG Senior category while Foster will also compete in the TaG Masters class, the same category Power will be contesting.