John Bowe is expecting to be off the pace at this weekend’s title-deciding Touring Car Masters season finale following the latest round of parity measures laid down by the category.

Bowe’s Mustang will run with 1200rpm less revs and 40kg more ballast at Phillip Island this weekend compared to its specification at Bathurst’s penultimate round.

The 6,500rpm limit and 1700kg combined car and driver weight are the result of the resumption of the category’s driver seeding parity, as well as the latest success penalty for Bowe’s results.

The Melbourne-based driver enters the weekend second in the standings on 979 points, splitting fellow contenders Jim Richards (1035) and Andrew Miedecke (909).

The drop-your-worst round format has clouded the title picture ahead of the finale however, with the category yet to confirm weather Bowe will be able to nominate the Sandown event – where he was excluded following an incident with a pitlane official – as his non-scoring round.

Bowe confirmed this week that he has lodged formal notification of his intention to drop Sandown, while a category spokesman told Speedcafe.com that the matter was yet to be verified by the TCM board. 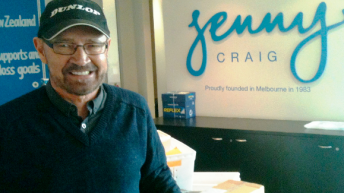 Counting Sandown as Bowe’s worst round, the adjusted standings see Bowe theoretically leading Richards by 71 points with Miedecke a further 29 adrift in third.

A total of 180 points remain available across the three races at Phillip Island.

Bowe took a light-hearted approach to the parity situation in a team preview this week, which included a picture of the former two-time Bathurst 1000 winner enrolling for a Jenny Craig weight loss course.

“All I can do is go out there and do my best and the result will be what it will be,” he said.

“It’s frustrating to be in this position with the car; no one has ever had to carry this much weight with such low revs before.

“It’ll be tough for my supporters to understand if we are running mid-field this weekend but I can only hope they appreciate that we haven’t lost any talent or ability!”

The V8 Supercars support action at Phillip Island will also include the penultimate round of the Australian Formula Ford Championship and the two-race Australian Road Racing Championships for Superbikes, Prostock and Bears Formula 1 & 2 motorcylces.