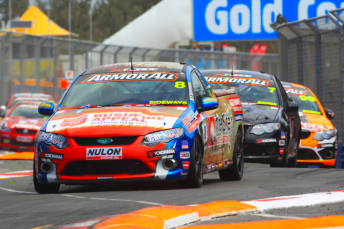 David Sieders’ hopes of winning the V8 Ute Racing Series title have been dealt a major blow after an appeal hearing resulted in a points penalty to the Ford driver being doubled.

Sieders had received a 35 point sanction for his part in a Race 3 incident at the beachside chicane that left several Utes heavily damaged.

An appeal by Sieders heard at the CAMS tribunal this week resulted in the penalty being upgraded to 70 points after it was ruled the intitial decision was too linient.

The hit drops Sieders from second to fourth in the series standings, a full 76 points behind leader Ryal Harris ahead of next month’s Homebush finale.

Third placed placed man in the series, Nathan Pretty, also walked away from the tribunal disappointed after having his disqualification from the Bathurst qualifying results upheld.

The #56 Holden had been found to be 1kg underweight following the session, resulting in the removal of the 31 points he had scored and a rear-of-grid start for Race 1.

Pretty is third in the series, 41 points adrift of leader Harris and two behind second-placed man Rhys McNally.