WEBBER WEEK: A battle in Britain

WEBBER WEEK: A battle in Britain Mark Webber made the decision to leave Australia with his sights set firmly on cracking the big time in 1996.

He had formed a partnership with Ann Neal who had previously worked as the public relations manager for the Australian Formula Ford Championship.

Aside from securing a long-term sponsorship deal with Yellow Pages, Webber departed Australia with Neal on a flimsy budget.

Taking the plunge in the British Formula Ford Championship, Webber faced a crisis on several fronts.

His results were less than pleasing and by mid-year he flew back to Australia with a degree of uncertainty about his ambition and whether he could sustain an international career. 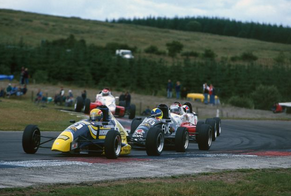 Webber leads the pack in his Van Diemen

Returning to England, Webber then managed to score several wins including the prestigious British Formula Ford Festival at Brands Hatch.

The Kent venue was the only track in England with which Webber had been well familiar, having raced there the previous year and in addition to experience as a driver coach.

Webber was second in the British championship with four wins and had also scored a victory at Spa as part of the Formula Ford Euro Cup.

After the Brands Hatch triumph Webber had sealed a test with Alan Docking Racing, run by the highly successful and versatile Aussie expat of the same name who established his Silverstone base in 1975.

Webber was duly signed to run with ADR in British F3 the following year, which at the time was a reasonable sized jump from the wingless and non-slick tyred FF class. His progress overseas was capturing decent interest.

Landing in F3 was seen as a huge breakthrough considering the category had produced a veritable galaxy of stars over several decades, notwithstanding Ayrton Senna’s monumental emergence after winning the championship for West Surrey Racing in 1983.

But what was seen as a crucial stepping stone for Webber almost came unstuck before it had begun.

As Craig Lowndes, with backing from Holden, embarked on a F3000 campaign in 1997 alongside Juan Pablo Montoya for Helmut Marko’s team, Webber’s F3 campaign hit some dry gullies.

Finances had become so tight that it was touch and go whether, after a lot of hard work and some not-too-insignificant success, Webber would have to return to Australia with unfulfilled ambitions.

Only a $100,000 donation from Australian rugby union star David Campese saved Webber’s career from ending up in the wrecking yard.

Campese had played footy with Alan Webber for Queanbeyan and the association stopped the quickly developing racer’s international career from being stillborn.

Crucially, the Australian had come to the attention of Mercedes-Benz. He had fielded a call from Norbert Haug, the boss of the three-pointed star’s motor racing operations, asking if he could replace Alex Wurz and partner Bernd Schneider in the FIA GT Championship’s Nurburgring 4 Hour.

Webber declined the offer on the grounds that he thought it pertinent to have a test before being plunged into high grip, high downforce sports cars.

Schneider ended up being partnered by Klaus Ludwig with the pair going on to win in the CLK GTR.

That phone call was to lead to another intersection in Webber’s remarkable career.