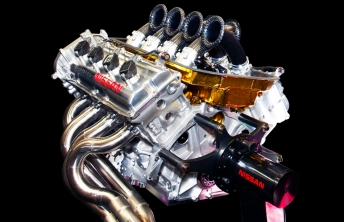 Nissan Motorsport is confident that it will have a revised engine package to match its new aero kit in 2014 with a major upgrade now close to sign-off.

In what will mark another significant resource commitment from Nissan, the manufacturer is expected to temporarily halt its VK56 engine casting plant in Tennessee, USA, to produce a limited run of modified cylinder heads for the V8 Supercars team.

The road-car based head has proven the biggest hurdle to the Melbourne-based squad’s engine program this year, with the team reporting that it has now maximised the valve and port sizes possible with the production architecture.

The team suffered two engine failures at the recent Armor All Gold Coast 600 following a pre-Bathurst head upgrade that team co-owner Todd Kelly says has left them “on thin ice” for reliability.

“We’re pretty close to getting the green light,” he told Speedcafe.com of the casting change, which needs approval from a range of global Nissan management.

“We’ve been working just as hard on that as we have on the aero side in the last couple of months. “The casting plant has been through it all with us and is aware of exactly what needs to happen, it’s just a matter of working out exactly what it’ll cost.

“The whole ordeal isn’t going to be a cheap exercise but it’s the next phase we need to go to for more power.

“We’ve really maxed it (the current head) out as far as how far we can go in the port with the material available; it’s well and truly put the handbrake on current develop,” he added.

“When we get the new castings done we can basically start from where we are now and put bigger valves in the head and bigger ports, which should be a good gain.”

Nissan Motorsport dispatched one of its current-spec engines to Japan late last week, where a Nismo technician will be dedicated to finding performance improvements for at least the next two months.

Although Nismo possess a range of combustion analysis equipment not available to the Australian team, Kelly expects only minor improvements over the work undertaken by his own team.

“We may be proven wrong but I doubt that they’d come back with another 15bhp or anything like that,” he said of the Nismo work.

As revealed by its president Shoichi Miyatani last month, Nismo’s increased involvement in the V8 Supercars operation marks an internal change of attitude towards V8 Supercars that had previously been classified as a domestic program.

Nissan attempted an aero evaluation run at Melbourne’s Avalon Airfield last Friday, but found its running hampered by the bad weather that had already delayed the test by two days.

The team is now expected to wait until after the end of the season to attempt any additional straightline running for its revised parts, which includes an end-plate mounted rear wing.

The four Altimas will this weekend line-up for the championship’s penultimate event at Phillip Island, where Kelly is optimistic of a strong performance.

“I’m really looking forward to Phillip Island, it might not be too bad when you look at how we went at the Grand Prix (Albert Park),” he said, despite the lack of performance upgrades.

“Straightline speed there is altered a fair bit by what your car is like in the corners and if you can get through the corner a bit quicker than the next guy you won’t be knocked around so much onto the straight.

“It’s a track that a few of us (Nissan) drivers have gone pretty well at over the years as well, so it could be a track where we’re a little further up the field.”