WEBBER WEEK: Starting out in Australia

WEBBER WEEK: Starting out in Australia 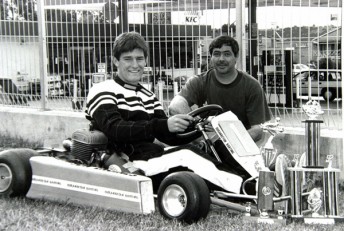 As a young teen Mark Webber was into his rugby league.

Webber was a proud ball boy for the Canberra Raiders during their halcyon days of the late 1980’s.

It was a time when the team was loaded with superstars such as Gary Belcher, Mal Meninga, Laurie Daley, John Ferguson, Ricky Stuart, Steve Walters, Brad Clyde and Kevin Walters; all of whom would serve as inspiration to the impressionable youngster.

They beat the Balmain Tigers in a memorable 1989 Grand final but as much as Webber loved footy, it was the lure of motor racing that made him tick.

Dad Alan Webber was a motorcycle dealer in Queanbeyan, New South Wales, and young Mark had a natural attraction to the two-wheel machines.

But he took up karting at 14 and within three years was a NSW champion.

The natural progression was to move into the time-honoured grassroots open-wheel class, Formula Ford, where treaded tyres and the absence of aerodynamics provided budding drivers with a valuable tool to learn their craft. Seeing the Australian Formula Ford Championship as Mark’s next port of call in 1994, Alan Webber purchased the RF93 Van Diemen which Craig Lowndes had used to win the 1993 national title.

There was little hint that Webber would be destined for Formula 1. He finished outside the top 10 in the 1994 championship that was won by Steven Richards, whose car was prepared by the well established Garry Rogers Motorsport operation in Melbourne.

He backed up for another season in the AFFC in 1995 when he finished the year in fourth place behind the latest rising star, Jason Bright.

Webber was to experience what grip and downforce were all about when he was given two starts by the Adelaide team Birrana Racing in the Formula Brabham Championship (to become Formula Holden from 1996).

Added to his win in the Formula Ford race at the Adelaide F1 Grand Prix in 1995, Webber’s career was beginning to blossom with an invitation from Van Diemen to drive in the British Formula Ford Championship the following year.