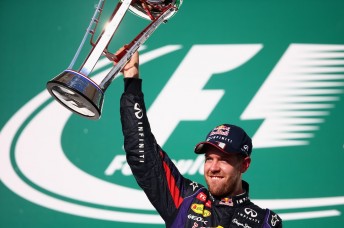 German driver Sebastian Vettel continued his extraordinary run of success with a record-breaking win in the US Grand Prix in Austin, Texas.

The four-times World Champion was never headed after starting from pole position, going on to become the first grand prix driver to score eight victories in succession in one season.

Lewis Hamilton was fourth ahead of Fernando Alonso and Nico Hulkenberg.

Vettel shot off the start and gradually eased away, setting the tone for another decisive victory.

Webber was beaten off the line by Grosjean and then Hamilton, before moving by the Mercedes driver on lap 14 to grab one spot back.

Vettel had moved to an almost eight-second advantage by lap 20 although he was kept in check by his team who, like the majority of pitlane, were fixed on a one-stop strategy in the 56-lap race.

By lap 28 Vettel pitted from a comfortable lead to shed the medium Pirellis for a set of hard tyres.

The following lap Red Bull called in Webber from third in a blink-and-you-will miss 2.3s stop.

With 20 laps remaining Webber had a couple of bites at Grosjean but then dumped time, complaining of a vibration which disappeared almost as quickly as it arrived.

A charging Alonso completed a copybook pass on Hulkenberg to move into fifth by lap 45.

Grosjean had looked comfortable in second for most of the race but Webber was still lurking and with eight laps remaining the Lotus driver had his mirrors full of the Red Bull.

However Webber had used up too much rear tyre life and his attempt to claim a Red Bull quinella had been diffused.

Alonso struggled for rear grip in the closing laps and fell back into the clutches of Hulkenberg with the Sauber sweeping past the Ferrari going into the first turn on the last lap.

But Alonso positioned himself for the switch-back to regain the place immediately and hold the position to the flag.

Adrian Sutil’s race was finished soon after the start when he made contact with Williams driver Pastor Maldonado. The Force India crashed heavily into the fence which brought up the safety car that remained in control until lap five.

Sergio Perez finished seventh ahead of Valtteri Bottas who scored some welcome points for Williams with Nico Rosberg ninth and Jenson Button staging a late-race pass on Daniel Ricciardo to claim 10th.

See below for full points