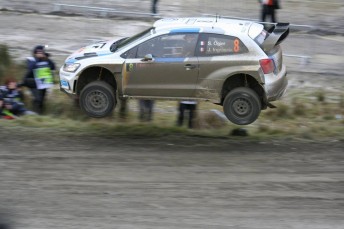 Sebastien Ogier has closed-out a dominant debut WRC season with Volkswagen taking victory on the final round of the championship, Wales Rally GB.

It was the ninth win of the year for the Frenchman who underlined his world championship and manufacturers’ title aboard the Polo R.

Ogier took the lead in Wales on Thursday’s opening stage and controlled his pace perfectly, fending off a sustained attack from two-time GB winner and his team-mate Jari-Matti Latvala on the slippery forest roads of mid and north-Wales. A solid run for Taylor in the tricky conditions

“I’m so happy, and big thanks to the team once again – the car was perfect,” said Ogier.

“I came here knowing this rally was not the best for me in the past, and even with that we managed to win a battle with a team-mate who feels at home here. It was another great victory for us and the end of a perfect season. It’s going to be a hard challenge to do better next year…”

Latvala finished as runner up, 21.8sec behind Ogier in Volkswagen’s second Polo R. The Finn had an inconsistent rally that featured stage winning highs as well as frustrating lows when he couldn’t find a confident feeling at the wheel.

Belgium’s Thierry Neuville was third, 1m 02.7s further back, to round off a remarkable season with the Qatar World Rally Team and, more importantly, secure second spot in the WRC drivers’ championship.