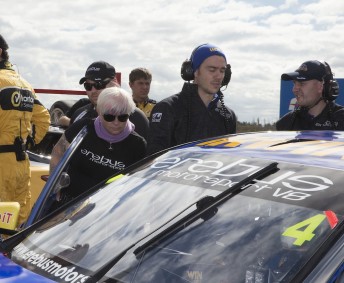 Erebus team owner Betty Klimenko to be featured on 60 Minutes

V8 Supercars team owner Betty Klimenko will feature in a 60 Minutes story about her colourful life and her motor racing involvement tomorrow night.

Filming was conducted over a number of weeks, centering around the Sandown 500 in September when reporter Tara Brown was taken for a hot lap with Erebus IRWIN driver Lee Holdsworth.

The extroverted Klimenko expanded into V8 Supercars this season and is running three AMG E63-badged entries as part of a customer program with the Mercedes-Benz performance arm.

When the story screens Klimenko will be in Macau where her Mercedes-Benz SLS AMG GT3 team is competing on the undercard at the famous Grand Prix meeting.

One of her regular V8 Supercars drivers Maro Engel is driving one of the GT3 cars in the City of Dreams Macau GT Cup with the second entry being driven by young Dutch driver Renger van der Zande.