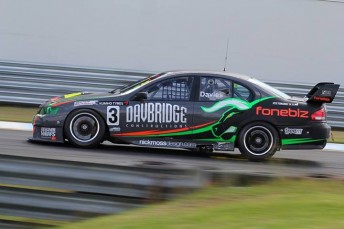 Shae Davies wrapped up the Kumho V8 Touring Car Series title on the penultimate day of the Shannons Nationals season at Sandown.

The Fernandez Motorsport Ford driver finished third in the first of three Kumho V8 races for the weekend to secure the crown.

Fellow Ford driver Ryan Simpson converted pole position into his eighth consecutive race victory in the class, while Matthew White made the most of a mid-race Davies mistake to complete the top three.

The second MW Motorsport Ford of rookie Jack Le Brocq started from the front-row and eventually came home fourth after the 21-year-old was forced to recover from a bad start.

The other four title fights at Sandown remain alive heading into Sunday.

Bruce Banks continues to lead the Kerrick Sports Sedan Series points despite a mechanical failure ruling his Mazda RX-7 out for the weekend.

The Tasmanian was able to finish fifth in the opening race in a Chevrolet Corvette borrowed from fellow competitor Dean Camm.

Tony Ricciardello won the race but remains 28 points down on Banks, while second placed Shane Bradford is 18 in arrears of the leader.

John Magro kept his slim hopes of snatching the Formula 3 Australian Drivers’ Championship title from Tim Macrow intact by charging from fifth on the grid to the win in the opening race.

Magro managed to charge down the inside and into the lead at Turn 1; subsequently surviving two Safety Car restarts on his way to the chequered flag.

Macrow was able to take second, ensuring he need only finish one of Sunday’s two races to seal his second title.

Nick Foster and Ben Gersekowski had shared the front-row but saw their chances dashed by a spin and a clutch problem respectively.

The result ensures that Fraser takes an eight point series lead into the final day of action.