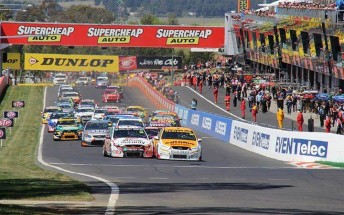 Every round of the Dunlop Series will feature two equal-length races next season after a revision to the formats for the second-tier class.

Recent years have seen a mix of two and three-race weekends, with the latter featuring a reverse top 10 grid Race 2.

Although the three-race concept has been dropped, the partial reverse grid remains for the Winton, Perth and Queensland Raceway events.

The four rounds not including a reverse grid – Adelaide, Townsville, Bathurst and Sydney – will feature separate qualifying sessions for each race.

All qualifying hit-outs throughout the year will be further split into upper and lower 50 percent groups; a format that was a last-minute addition to the Winton round this year.

Each race during the season will pay equal points, regardless of the grid format. Unlike the main series, it is expected that the Dunlop Series will continue to award round winners.

The format changes were tabled in a draft 2014 Operations Manual sent to V8 Supercars and Dunlop Series teams late on Friday afternoon.

The document, which is yet to undergo FIA approval, also confirmed two planned procedural changes for the premiere class.

In a bid to negate fuel consumption differences between manufacturers, all fuel races outside of the Pirtek Enduro Cup will continue the minimum fuel drop regulation introduced at the Armor All Gold Coast 600 last month.

Unlike 2013, every round will include at least one race with a fuel stop next season.

All Safety Car restarts will meanwhile feature an ‘acceleration zone’ similar to that seen for this year’s double-file Super Sprint restarts.

The rule has been introduced in a bid to clean up the previous grey area of the timing of the lead car’s acceleration when the Safety Car pulls in.

Additionally, the new-for-2013 Car of the Future is now officially being referred to as the ‘New Generation’ V8 Supercar.