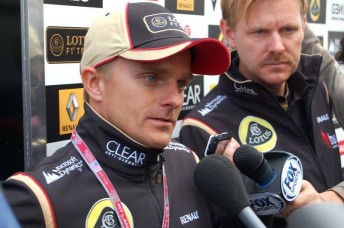 The Lotus and McLaren Formula 1 teams have officially announced their replacement drivers for the injured Kimi Raikkonen and outcast Sergio Perez respectively.

As previously reported, Heikki Kovalainen will drive for Lotus at the United States and Brazilian Grands Prix following Raikkonen’s decision to bring forward his back surgery.

Kovalainen has not raced since losing his Caterham seat at the end of 2012, but has recent experience of Formula 1 machinery having remained the reserve driver for the minnow outfit.

Amid negotiations to return to a race seat at Caterham next year, the 32-year-old is confident of performing strongly in Austin this weekend.

“We’ve seen this year that the E21 is a car which can win races and finish on the podium, so I will be pushing hard for the best results possible,” he said.

“Jumping into a car so late in the year when you have not been competing in the races all season will be a challenge, but I know the team at Enstone well so I have no concerns about getting up to speed.”

Lotus’ reserve driver Davide Valsecchi had been an initial favourite for the seat, which was subsequently offered to the retired Michael Schumacher and 2014 Lotus seat contender Nico Hulkenberg.

Both Germans declined the approach, while 26-year-old Italian Valsecchi was overlooked due to his inexperience.

“On the one hand we had our reserve driver Davide Valsecchi – who is a talented young driver that has shown a great deal of promise – and on the other we had the opportunity to bring in a seasoned Formula 1 competitor in Heikki,” said team principal Eric Boullier.

“Whilst we have every faith in Davide’s abilities, we are obviously involved in a tight Constructors’ championship battle, so it was decided that the experience Heikki could bring to the team would be invaluable as we aim to finish the year in the best position possible.”

McLaren meanwhile has confirmed that Kevin Magnussen will join its team full-time in 2014, replacing Sergio Perez.

The team’s principal Martin Whitmarsh emphasised Magnussen’s impressive form in both the Formula Renault 3.5 Series and limited test outings for McLaren this year as the reasons for his signing.

“Kevin is clearly very talented and very determined, and we therefore have high hopes for him,” he said.

“Moreover, every time he’s tested our Formula 1 car, he’s been very quick and very methodical, and his feedback has been first-class.”

The son of former Formula 1 driver Jan Magnussen added that joining McLaren will be a dream come true.

“It’s been my dream to drive for McLaren ever since I was a small kid, and it’s no exaggeration to say that I’ve dedicated almost every day of my life to achieving the goal of becoming a McLaren Formula 1 driver,” said the Dane.

“I have an enormous amount of respect for everyone at McLaren, and I want to say a massive ‘thank you’ to everyone, but most of all to Martin and his senior colleagues, for giving me this chance.”

Perez faces an uncertain future beyond next weekend’s season ending Brazilian Grand Prix, with the Mexican now one of several fighting over the remaining seats at Lotus, Force India and Sauber.