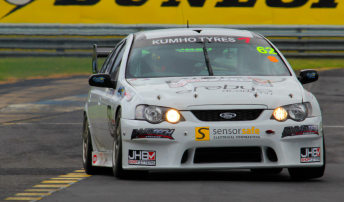 Debutant Jack Le Brocq is poised to shake-up the Kumho V8 Touring Car Series field this weekend after putting in a strong performance during Friday practice at Sandown.

Having proven a star performer in sporadic Formula 3 and GT appearances with Erebus across the year to date, the 21-year-old is driving a MW Motorsport Ford as a precursor to a planned Dunlop Series assault in 2014.

“It was a really good day and nice to finally get some miles in one of these cars,” he said.

“I’m learning a lot and working on the data and we’ll keep chipping away with it over the weekend.

“The guys who have been running these cars all year and doing all the testing are our benchmark this weekend, so we want to run at the front.

“We’re jumping into the deep end, but I’m sure we’ll get through.”

Fellow category rookies Simon Tabinor and Gerard McLeod were 10th and 14th fastest in the final of three practice sessions respectively ahead of qualifying and the opening race on Saturday.

A class rookie also shone in Formula 3 practice, with former Formula Ford runner Simon Hodge making the most of new tyres to trouble the top three in his very first session aboard a Team BRM Dallara.

It was a difficult day for two of the key AMChamps runners, with the BMW 1Ms of Beric Lynton/Matt MacKelden and Tony Alford/Peter Leemhuis now in doubt for the remainder of the weekend after both striking engine problems.