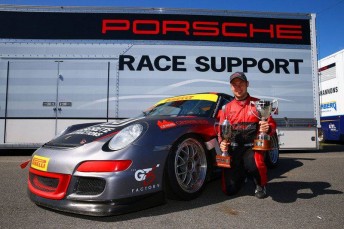 Victorian youngster Richard Muscat has been named the inaugural Shannons Nationals Driver of the Year after dominating the 2013 GT3 Cup Challenge.

The award has been instigated through the series’ in-house publication The Racing Magazine to recognise an outstanding talent amongst the various Shannons Nationals classes.

A selection of Shannons Nationals management, Australia’s motorsport media and an online fan poll all voted on the winner from a short list of 30 drivers.

Muscat won 13 of the 18 GT3 races during the season in addition to taking 17 fastest laps and five from six pole positions.

He also competed in two rounds of the Carrera Cup Australia and is expected to graduate to the class full-time in 2014.

“Richard and his team have performed brilliantly all season and he is clearly a very talented young driver with a bright future and we wish him well in his future endeavours,” said Shannons Nationals series director Rob Curkpatrick.

“Winning competitions like this might not seem overly important, however when it is voted on by peers and industry people who really understand the sport it means something.

“He clearly has the support of the public and his friends and family as he also won the fan vote on our online poll.

“The Shannons Nationals exists so categories like the Porsche GT3 Cup Challenge can give their competitors a place to race and we are always very excited to be part of something special – and we’ll always remember that Richard Muscat came to prominence at Nationals events this year.”

The 2013 Shannons Nationals season concludes at Sandown this weekend with six categories on the program.