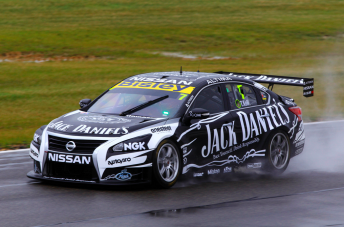 Plans for Nissan Motorsport to undertake a private aerodynamic test at Avalon Airport this week are on hold due to continued bad weather.

As previously reported, Nissan has been given permission by V8 Supercars to rehomolgate its aero kit alongside the new-for-2014 Volvo S60 next January after high drag levels were blamed for the Altima’s poor straightline speed.

Initially scheduled for Wednesday, the team’s private test will serve as preparation for the category’s official back-to-back running in the new year.

According to team co-owner and driver Todd Kelly, the proximity of the next race meeting at Phillip Island means that the Avalon hit-out will be delayed until the end of the month if it does not occur by Monday.

“The weather in Melbourne has just been ridiculous; it hasn’t stopped raining and there’s gusting winds that would make any aero running a waste of time,” he told Speedcafe.com on Wednesday.

“By Tuesday we will have to convert the car (which is Kelly’s #7 entry) back to where it needs to be for Phillip Island, so basically we’re at the mercy of the weather as to whether we can get it done.”

Kelly says that the team will take revisions of all its external aerodynamic pieces to the test, including an end-plate mounted rear wing. Nissan is currently the only manufacturer to run a centre-mount design following Holden’s move to the end-plate fixings for this season. 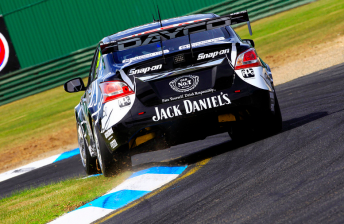 The private test may see the team lock-in its new rear-wing – which can still be trimmed via main plane angle adjustments and gurney profiles – while any revisions to the front spoiler will more than likely have to be left open until after the official running.

“We’re almost up against as big a time issue as to what we were last year because we need to get it all produced for Clipsal,” explained Kelly.

“We need to go right back to modifying tooling, making moulds and going through the process of making enough parts to go racing.

“When we go to the aero test (in January) we’ll have four or five different parts to the car that we’ve modified and can evaluate.

“In a perfect world it’s just one part that fixes it and the rest can stay the same but just in case, we are prepared to do the whole thing.”

He added of the new rear wing: “For the shape of our car it’s a lot more of an advantage to have that type of wing because of how rounded the boot is.

“It (the end plate mount) is certainly something we’re looking at pretty closely but it’s just one of many new things we’ll be testing.”

The new parts have been designed and produced in-house at Kelly’s Braeside workshop, while a simultaneous Computational Fluid Dynamics analysis is being completed under the guidance of Nissan’s United States-based director of motorsport innovation, Ben Bowlby.

The engagement of Bowlby was revealed by Nissan’s global motorsport manger Darren Cox to media in Japan last month.

While Cox has been scathing of V8 Supercars’ open-air aerodynamic testing procedures, both Kelly and Bowlby are confident that strong preparation will see Nissan walk away from January’s testing in good shape for the new season.

“The biggest difference (compared to the last aero tests) is that we’ll have high-level CFD of all of the components we’re testing and secondly we’ll be doing our testing and baselines at a lot higher speeds,” said Kelly.

“I think those two things will make a huge different to the result we’ll get and how that translates to our speed on the race track.

“If we can get up to 270km/h on the runway (at Avalon) and do coast downs from there I think we’ll be a lot more accurate rather than doing it from 200km/h (which is the speed traditionally used in V8 Supercars’ official tests).”

Last year, Nissan’s private aero evaluation running was undertaken within the confined spaces of Calder Park, while Holden utilised its high-speed Lang Lang facility for the initial tuning of its VF.

“I can’t do it all (design the revised aero kit) because I’ve got too much on my plate but I can share the experience of techniques and where to put emphasis and so on,” he said.

“I haven’t had any history with the category but I do know that what makes a good car and the strategy for developing a racing car is pretty much universal.”

The timing of V8 Supercars’ final aerodynamic testing will likely be dictated by the ongoing development of the Volvo S60s, which Garry Rogers is adamant will be track testing before Christmas.