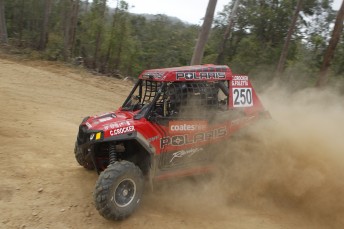 Cody Crocker in the Polaris

Australian Rally Championship stalwarts Cody Crocker and Michael Guest are set for an intense battle in the Polaris versus Can-Am Side-by-Side Challenge at this weekend’s Rally Victoria outside Warragul.

It will be the first time the Side-by-Sides have raced at Rally Victoria, so it will be a case of who gets up to speed the quickest that will decide the outcome.

“I have no doubt it’ll be an even bigger battle between Guesty and I when we get to Rally Victoria,” said Crocker who pilots Polaris’ RZR XP900. 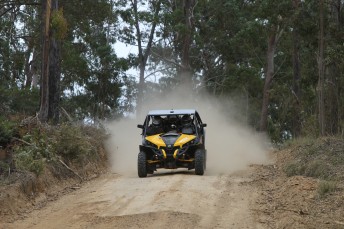 Michael Guest has shown the potential of the the Can-Am

“As the year has progressed Guesty and the Can-Am team have sorted their machine and at the last Round in Coffs Harbour there was nothing between us in terms of speed.

“I think the roads in Victoria might be the biggest factor, they’ve (Guest) certainly set the pace on the high-speed roads, where as our car is more suited to the twisty stuff. I think any advantage you can grab from the start you’ll definitely want to hold onto!”

At the World Championship Round in Coffs Crocker took maximum points on the opening day before Guest hit back claiming the win on the second and third days.

“We knew we always had a good car, it’s just that we had a few mechanical issues that have held us back this year,” said Guest.

“If it wasn’t for a driveshaft problem in Coffs we should have been able to take all three days.”

Guest though feels that the Can-Am Maverick 1000 has the outright speed in both the fast and flowing as well as the tight and twisty roads. “It’s probably hard to say if his car or our car is better suited to one type of road or another.”

“The Can-Am is mid-engined, and I think that probably makes it more stable on the high-speed roads, compared to the rear-engine Polaris which I imagine is a bit more like a pendulum to drive.”

“Either way it’s a new event for both of us, and we’ll both be pushing as hard as we can from the very first stage!”