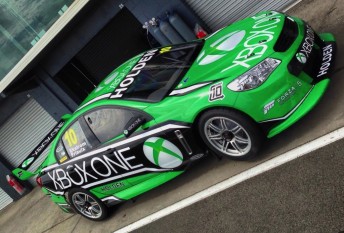 The Holden prototype in the Phillip Island pitlane. pic: Nick Percat via twitter

V8 Supercars is confident that its Dunlop control tyres will withstand the rigours of the upcoming Sargent Security Phillip Island 360 after completing a pre-event test at the seaside venue.

The day saw Nick Percat cut laps in the category’s own Holden Commodore Car of the Future prototype, which remains in Xbox colours after recent promotional duties.

The test is said to have included a consecutive 120km spell; 20km longer than the two 100km sprints that will be held on the Sunday of the event.

According to V8 Supercars, Percat eclipsed Craig Lowndes’ existing lap record of 1:33.27s, set in 2012, by more than a second.

Speedcafe.com expects that the actual race cars will be lapping significantly faster again on the race weekend.

“It was a highly beneficial exercise,” said V8 Supercars’ motorsport manager Damien White of the test.

“While we didn’t expect issues it was prudent to spend the time to assure our teams that no problems are anticipated.”

Matt Stone, whose Queensland-based Dunlop Series team has been in charge of preparation of the prototypes throughout their lives, oversaw the test alongside V8 Supercars personnel.

The car’s sister Ford prototype, which has not seen a race track in some time, remains housed at MSR.