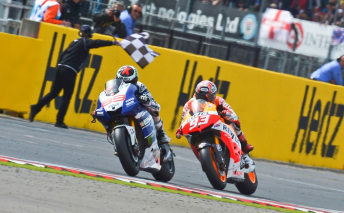 Marc Marquez and Jorge Lorenzo will go head-to-head for the MotoGP title this weekend in just the second final round showdown in 20 years.

Marquez leads Lorenzo by 13 points heading to Valencia, ensuring that a fourth place finish will seal the title regardless of Lorenzo’s efforts.

The Repsol Honda rider is aiming to become the first rookie to win motorcycle racing’s premiere class title in 35 years. At 20 years old, he would also be the youngest champion.

“We’ve had good races in Valencia, I’ve always tried to give it my best there,” says Marquez ahead of the weekend, having stormed from last to first in the 2012 Moto2 race at the venue.

“I have fond memories of last year’s race in Moto2, but the weather will also be a factor to consider because it is very changeable.

“Obviously, we know what is at stake in this final Grand Prix of the year, but we will, as ever, approach it as we have done every other race, working hard from the Friday and doing our best.”

Two-time and reigning champion Lorenzo is firmly positioning himself as the underdog ahead of the decider.

The 26-year-old Yamaha rider has fought against the seemingly superior Honda all season, winning the most recent two races prior to Valencia.

“We don’t have anything to lose but everything to win and this card plays on our side,” he said, adding that he “thought the championship was over” three races ago.

“Maybe our main rival can feel much more pressure in Valencia than us because he is so close to victory. I look forward to riding there and pushing with all my force.

“If we can continue to ride at our level, we can fight for the win and then wait for the circumstances… you never know what can happen, especially if the forecast is uncertain as it was last year.”

Marquez has led the standings for the majority of the season, but a disqualification in Australia and a neck-jarring warm-up crash at Motegi have hurt his late-season results.

Lorenzo meanwhile lost significant ground mid-season thanks to breaking a collarbone in practice at Assen which eventually resulted in him missing the German Grand Prix.

This year marks the first time that the title has been decided at the final round since 2006, when Valentino Rossi dramatically fell from his Yamaha, gifting Nicky Hayden the title.

Fourteen other deciders have been held since the inaugural 1949 season, although the second most recent, 1993, was a forgone conclusion as Wayne Rainey had been unable to start the final races following a career-ending crash.