Loeb and Bamber to race Carrera Cup at Macau

Loeb and Bamber to race Carrera Cup at Macau 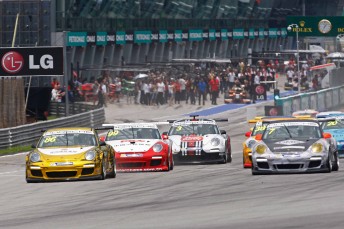 A strong field will take part in Carrera Cup at Macau

For the rally hero it will be his first visit to Macau, apart from that he knows very little about the 6.2km city track.

“I only know that it’s a hard track but that drivers appreciate it in general,” said Loeb. “Everybody tells me that it’s unique and great to drive on.

“Overall it’s something that I enjoy. It reminds me of the rally, because there is no release and no room for error. In general these are intense races, which are played on the details, and maximum risk-taking in qualification. I love it!”

Kiwi driver Bamber will be drawing plenty from Japanese team-mate Keita Sawa, who was a winner of the Macau GT Cup in 2009 and 2010 and runner-up in the Macau round of the Porsche Carrera Cup Asia in 2006 and 2007.