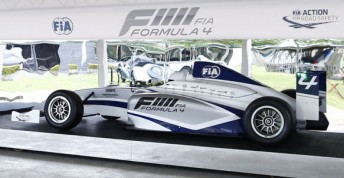 The Confederation of Australian Motor Sport has announced that an FIA Formula 4 Championship will be run in Australia from 2015.

CAMS had been assessing the introduction of such a class for some months, resulting in great uncertainty within the existing Australian open-wheel community.

“We are always looking for new and innovative ways for our great sport to grow and Formula 4 is certainly that,” said CAMS chief executive Eugene Arocca in a statement announcing the class.

“Essentially it’s the first step on the ladder from Karting to Formula 1.”

The FIA Formula 4 concept features a control 1600cc engine package, of which the marque can be different in each region.

The carbon-monocoque chassis for the wings-and-slicks formula will also be a control item in the domestic class.

The appointment of key suppliers and a series promoter are all yet to be confirmed. It is thought likely that the series will run to a centrally-controlled format, rather than having cars prepared by individual teams.

“We have already had conversations with a number of parties who are interested in becoming involved, so an open tender process provides everyone with a chance to take on this exciting opportunity in partnership with CAMS and we plan to announce the successful party in due course,” said Arocca.

CAMS confirmed earlier this week that it will endorse the Formula Ford Association’s bid to run a five-round national series next year following CAMS’ decision to end the current championship.

The ex-Formula 1 driver hopes to eventually introduce national-level Formula 4 competitions in all affiliated countries, with Australia now the first to commit.

“To see such a major player as the CAMS become involved in the adventure of Formula 4 sends out a strong message in favour of this new competition which we are in the process of introducing,” said Berger in the CAMS statement.

“It is an example of real synergy between the FIA and a national motor sport governing body.

“It is also yet another indication of the inherent value of this formula which seeks to help drivers to step up from karting to a single-seater racecar that will allow them to hone their skills while also keeping a cap on costs, along with active promotion in the media.

“I strongly believe that the example of Australia will be followed very soon by many other countries.”

The FIA will face a major challenge to introduce its Formula 4 to the important British market, where Jonathon Palmer and the British Racing Drivers Club have already established their own Formula 4 variant. The BRDC version features space-frame chassis and control 2.0 litre Ford engines.

“I think this is a great step forward for motor sport in Australia, that there is a great conduit now from karting through a proper single seater, wings and slicks category that will help aspiring drivers move onto the next level,” said Doohan.

Added Jones: “I am in favour of any formula which allows a young person to further their career in open wheel racing at a more affordable price than which is currently available.”